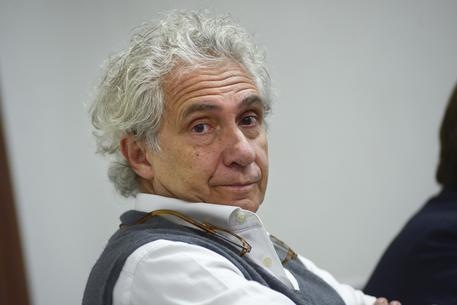 (ANSA) - Rome, June 12 - Premier Matteo Renzi on Thursday faced the first party crisis since becoming charismatic Democratic Party (PD) leader three months ago, as a handful of rebels defied the whip on a controversial reform of the Senate.
There have been rising mutterings about a deal Renzi struck with centre-right leader Silvio Berlusconi over the reform to streamline government but thus far there had been no open rebellion against a leader the PD has been seeking for years, whose media savvy and command of briefs rival or outstrip those of Berlusconi and the other main political player, anti-establishment leader Beppe Grillo.
But the PD's bid to force the abolition of the Senate through parliament brought into the open the opposition of the minority faction which believes stronger government entails keeping the Senate as a necessary check on executive power and on a House that would just rubber-stamp the government's decisions, analysts said.
Senator Corradino Mineo led a rebellion of 13 Senators, including himself, prompting fears of a wider split.
But Renzi immediately squashed such speculation.
The Democratic Party (PD) is "not a taxi you can take to get elected" and then leave complaining about an alleged "purge", he said. Italy is at a "crossroads" and "I cannot leave the country to Mineo", he said, noting that a 41% win in European elections had given him a mandate for reform. Renzi said he was "stunned" that Mineo, who did not agree on a deal with the centre right to turn the Senate into a non-elected assembly, should talk about a purge.
A key Renzi ally, the reform minister, said the rebellion by "a paltry" 13 Senators would not halt Italy's dynamic young premier's drive to give the country an efficient political system.
Reform Minister Maria Elena Boschi insisted the government's institutional reforms won't be stopped by the rebels. "The process of reform is going ahead, you can't stop it for a handful of Senators," said Boschi. The group of 13 PD Senators suspended themselves from the parliamentary caucus on Thursday after Mineo was taken off the Upper House's constitutional affairs committee because he was not toeing the government's line. The rebels say the decision to replace Mineo on the commission with the PD's Senate whip Luigi Zanda, one of the vast majority of Renzi loyalists, is unconstitutional.
The government's plan to overhaul Italy's slow, costly political apparatus includes a revamp of the Senate to turn it into a leaner assembly of local-government representatives with minimal law-making powers to save money and make passing legislation easier. Mineo, however, is part of a minority within the PD who want the Senate to continue to be an elected assembly.
"No one asked them to suspend themselves," added Boschi.
"They'll have to decide whether to be part of the reform process or make a different choice". Another senior PD member, Luca Lotti, said the rebels should not try to torpedo the reforms that got an endorsement of sorts when the PD won over 40% in last month's European elections.
"Thirteen Senators cannot be allowed to put into question the will of 12 million voters and they cannot halt the reforms that the Italian people have asked for," Lotti said.
"Mineo betrayed the agreement with the group. We are the Democratic Party, not the Anarchy Party".