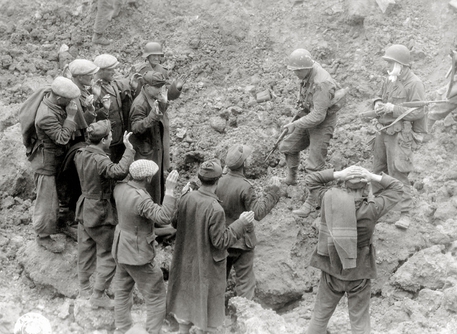 (ANSA) - Rome, June 6 - A rare photograph of Italian troops evidently surrendering to American soldiers on a Normandy battlefield has fuelled speculation about possible Italian military involvement against Allied forces after D-Day.
Also surrendering with the Italians in the picture are German soldiers. The Italians in the photo wore military uniforms but some of them wore typical Sicilian "coppola" flat caps favoured by shepherds.
The Italian soldiers were not wearing the insignia of the Republic of Salò, the Nazi puppet government set up in northern Italy under figurehead leadership of Benito Mussolini.
One theory is that the Italians were forced labourers known as "Interned Italian Workers".