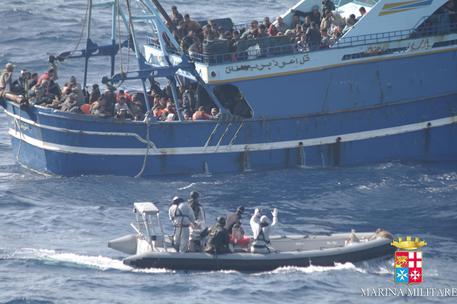 (ANSA) - Rome, June 6 - The Italian Navy said early on Friday that it had saved over 2,500 migrants at sea over the previous 24 hours. The Navy said it rescued a total of 17 migrant boats that had departed from the coast of North Africa. They were saved as part of the the Mare Nostrum (Our Sea) Rescue Operation that Italy launched after around 400 people were killed on two migrant-boat disasters in October.
After the Navy statement, the Italian Coast Guard said it had rescued another 300 people in a boat in trouble some 42 miles south of the Sicilian island of Lampedusa.
Furthermore, a merchant ship rescued 94 more and was taking them to Catania. Italy is having trouble managing after a massive increase this year in the already big flow of migrants who attempt the hazardous crossing from North Africa to Italy.
Last week Interior Minister Angelino Alfano said almost 40,000 migrants landed on Italy's shores in the first five months of this year - almost as many as the total for all of last year.
Premier Matteo Renzi accused the European Union of looking the other way and not doing enough to help Italy after dozens of people were killed in two new migrant disasters in May.
"Europe explains everything about how to catch swordfish, but it turns its head when we go to rescue people in trouble," he said.
The government has come under fire over the Mare Nostrum Operation, which some opposition parties say is encouraging people traffickers to increase illegal crossings.