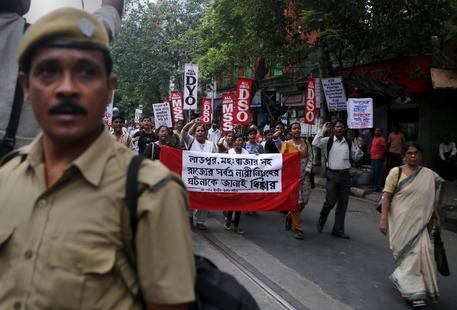 (ANSA) - New Delhi, June 3 - A female judge in the northern Indian state of Uttar Pradesh has been raped and seriously injured in the latest in a long string of sexual attacks against children and women across the country, Indian media reported Tuesday.
Aligarh police superintendent Nitin Tiwari said the judge was found drugged and unconscious at her home on Monday.
"Given her serious health condition it has not been possible for her to undergo tests linked to the rape," Tiwari added.
Media have paid increasing attention to sexual violence in India since the 2012 gang rape and murder of a student on a Delhi bus. Last year the government tightened rape laws after widespread protests but the tide of sexual violence has not abated. Monday's rape came just a couple of days after two teenage cousins belonging to the country's 'untouchable' Dalit community were raped and hung from a mango tree, also in the state of Uttar Pradesh.
And on Tuesday police arrested one man in connection with the gang rape of a 10-year-old boy in New Delhi on May 27.
Seven others remained to be found.