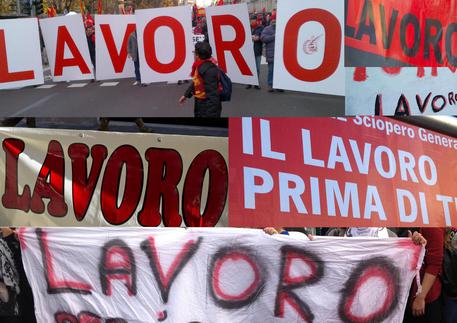 (ANSA) - Rome, May 28 - As Italy struggles towards economic recovery, efforts are being held back by high unemployment, a record-low birth rate, an aging population and a brain drain, the national statistical agency said in a pessimistic report Wednesday.
According to Istat, approximately 6.3 million people were unemployed last year as the Italian economy shed 478,000 jobs compared with 2012, the largest drop since the economic crisis began in 2008.
At the same time, the unemployment rate has continued to rise, from 10.7% in 2012 to 12.2% last year to around 12.7% in the first few months of 2014, the agency said in its annual report.
And in a significant reshaping of the workforce, part-time and temporary contracts jumped last year by 22.1% or 572,000 posts.
Italy has been struggling to emerge from its worst recession since the Second World War and hopes were cashed by statistics earlier this month suggested that the economy contracted unexpectedly in the first quarter of this year by 0.1% rather than expanding as first thought.
Youth have been especially hard-hit by the economic crisis and young people are taking their education and training and leaving the country for work elsewhere, the Istat research found.
About 68,000 Italians moved aboard in 2012, the highest level in a decade and 36% above 2011 figures.
Last year, 2.435 million youth aged 15 to 29 were in the category known as NEET - neither employed nor in education nor training programs.
That number had jumped by 576,000 since 2008, said Istat.
At the same time, the number of babies born in Italy dropped to a record low of 515,000 in 2013, down 12,000 from the previous lowest level on record from 1995. Italy has registered low birth rates for many years, with experts saying the high levels of unemployment and job instability that young people face is causing couples to have children later and later in life.
At the same time, Italy has one of the oldest populations in the world and is second only to Germany among the 28 nations of the European Union, Istat said.
On average, there are 151.4 Italians over 65 years for every 100 youngsters under 15.
Only Germany has more older people, with an average 158 senior citizens for every 100 young people.
The economic hard times are taking a toll on consumer consumption, normally an important element of economic growth.
However, last year consumption fell by 2.6% - the third consecutive year of declines although that was less than the 4% drop in 2012. The disposable income of households slipped by 1.1% in 2013 after falling 4.6% in 2012, the agency added.
Istat also warned that Italy has a "great inequality in the distribution of primary income". In fact, it said that Italy has the worst record in the European Union for income inequality with as many as 7.6 million Italians living in conditions of severe deprivation.
That includes household earnings and savings and was measured after government support programs designed to even out household incomes.
Istat said that government efforts in the Scandinavian countries lead the EU in terms of improving income equality.