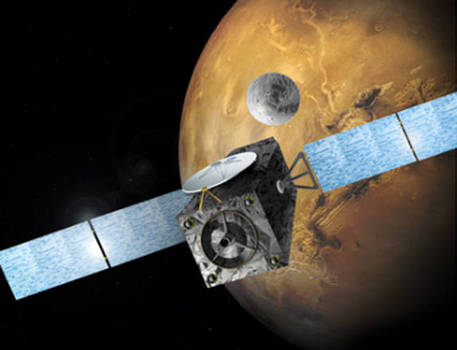 (ANSA) - Turin, May 28 - A joint European and Russian mission to Mars will launch in January 2016, one of the mission's major contractors announced Wednesday.
The Exobiology on Mars (ExoMars) mission will search for signs of Martian life, past or present. It is being developed by the European Space Agency (ESA) in collaboration with the Russian Federal Space Agency (Roscosmos) to the tune of one billion euros, according to some sources.
The two-part mission launching in 2016 and 2018 will among many other tasks search for methane and other gases that could be signatures of active biological or geological processes. "Our launch window is from January 7-26, 2016," said Walter Cugno, who directs the ExoMars program at Thales Alenia Space. The French-Italian aerospace company owned by Alcatel-Lucent (67%) and Finmeccanica (33%) is Europe's largest satellite manufacturer. It is building a robotic orbiter-carrier called the ExoMars Trace Gas Orbiter (TGO) which will deliver an EDM stationary lander, named 'Schiaparelli' after the 19th-century Italian astronomer who first described the surface of Mars. It is also building an Entry, Descent and Landing Demonstrator Module (EDM) in a super-clean room - the only one of its kind in Europe - to reduce the risk of carrying Earth bacteria to Mars as much as possible.
The ESA announced the joint mission in March 2013, saying it will provide the TGO and the EDM in 2016, and the carrier and rover in 2018.
The lead builder of the ExoMars rover is the British division of Airbus Defence and Space, while the wheels and suspension are reportedly being paid for by the Canadian Space Agency and manufactured by MDA Corporation in Canada.
Roscosmos will be responsible for the 2018 descent module and surface platform, and will provide launchers for both missions.
Both partners will supply scientific instruments and will cooperate closely in the scientific exploitation of the missions, according to the ESA. Italy is the largest European contributor to ExoMars, followed by the UK, Poland and Romania.
The Russians were invited in after NASA pulled out of the ExoMars mission in 2012, citing a budgeting crisis.