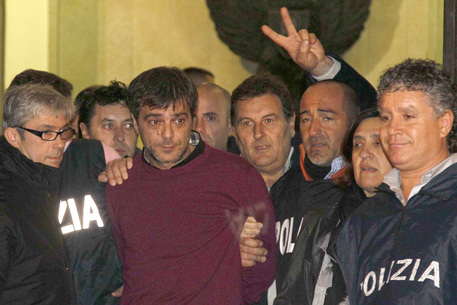 (By Denis Greenan).
(ANSA) - Naples, May 28 - The most dangerous Italian mobster ever to turn State's evidence has claimed local politicians enabled his organisation to thrive around the southern city of Naples and make inroads in business and politics elsewhere.
Antonio Iovine, a top Camorra boss whose decision to become informer made international headlines earlier this month, has told prosecutors that the Neapolitan mafia was able to prosper thanks to the complicity of widespread corruption in the local political system. "There was money for everyone in a system that was completely corrupt," Iovine told investigations days ago, in judicial papers made public Wednesday. "It made no difference what political side a mayor came from because the system operated, and operates, in the same way," he said.
Colloquially, in the Naples area, the mafia-ridden political and business machine is known as 0' sistema (The System) in the local dialect.
"I'm well aware of the crimes that I've stained myself with. "But I'm explaining to you a system in which the Camorra is not the only one to blame".
Iovine freely admitted that tenders were only open to Camorra-linked or Mob-run firms, but claimed "this could have been different if politicians had decided to do something about it".
But Lorenzo Diana, one of the former local politicians cited by Iovine, claimed "there was nothing we could do, the Camorra dominated things, Iovine has discovered hot water".
Diana said he had "reported this state of affairs on several occasions" to anti-mafia bodies "at all possible levels".
Iovine's statements were made public on Wednesday after being presented as evidence in a criminal trial. Iovine, also known as 'o ninno', is considered one of the four former bosses of the powerful Casalesi Camorra clan from Casal di Principe in the province of Caserta, whose death threats have forced anti-mafia writer Roberto Saviano, of Gomorrah fame, into 24-hour police protection.
The others are Francesco Bidognetti, Francesco Schiavone (aka Sandokan) and Michele Zagaria.
Iovine, 50, is currently serving a life sentence for multiple murder and other crimes under Italy's tough prison regime for organised criminals, the so-called article 41-bis, after being captured in November 2010 following 15 years on the run.
He was sentenced to life imprisonment in absentia in January 2010 along with Bidognetti, Schiavone and Zagaria following the 12-year so-called Spartacus maxi trial against the Casalesi clan.
Saviano has hailed Iovine's 'repentance" as "the biggest blow ever against the Camorra-run System".
Mafia experts say it is even more significant than the 1980s evidence of former top Cosa Nostra figure Tommaso Buscetta, because Buscetta's evidence, which eventually implicated late Christian Democrat statesman Giulio Andreotti, regarded events much prior to his capture. Iovine was also in a position to keep pulling the strings despite the severe conditions of his incarceration, Camorra analysts said.