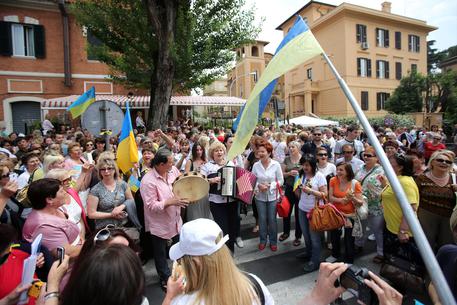 (ANSA) - Kiev, May 27 - At least 100 people died in Monday's clashes between pro-Russia separatist rebels and Kiev forces in the southeastern city of Donetsk, authorities in the self-proclaimed republic said.
Earlier the Ukrainian government said there had been "dozens of victims" among the ranks of the militias in the latest episode of fighting with soldiers engaged in quashing a separatist uprising in southeastern Ukraine. However, authorities in the self-proclaimed People's Republic of Donetsk said at least half the victims were civilians.
Many died in a late-night attack on two marked trucks carrying injured militiamen to the city for medical treatment, the authorities added.
"It is a crime against humanity," they said. "We still can't recover the bodies, we are under sniper fire," added local separatist leader Denis Pushilin.
Meanwhile Ukraine's president-elect Petro Poroshenko said Tuesday the so-called 'anti-terrorism' operations "must last and will last hours, not months" as Russian President Vladimir Putin called for "peaceful dialogue" between Kiev and regional representatives".
Russia has been accused of backing the separatist uprising, which began after Ukraine's Crimea region voted in favour of self-rule in March and was subsequently annexed by Moscow. Separately, the bodies of Italian photoreporter Andrea Rocchelli and his Russian interpreter Andrey Mironov began their final journey home on Tuesday. The pair, both freelancers, were killed in the flashpoint city of Sloviansk on Saturday.