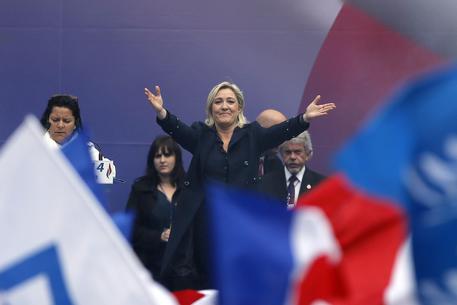 (ANSA) - Paris, May 26 - Marine Le Pen's far-right Front National (FN) was poised to come first in France, as Euroskeptic parties posted strong showings in many countries in Sunday's European elections.
Eurosceptics also came first in Denmark, the UKIP was contending for first place in Britain and in Greece the left-wing Syriza party, who are staunchly critical of European Union austerity, were the most popular party.
"The inevitability of European integration ends tonight," said UKIP leader Nigel Farage.
French President Francois Hollande called an emergency meeting for Monday at 8.30 with Prime Minister Manuel Valls and other ministers after preliminary results suggested his Socialist party was set to come third with under 14% of the vote, compared to around 26% for the FN.
The opposition centre-right UMP looked set to come second with around 20% of the vote.
Valls admitted the result was a political "earthquake", while Le Pen called on the beleaguered Hollande to dissolve parliament so that new national elections could be held in the light of the outcome. "What else can the president do after such a rejection?" she said. "It is unacceptable that the national assembly should be so unrepresentative of the French people".
The centre-right European People's Party (EPP) is set to be the biggest group in the new European Parliament, according to projections based on provisional results released by the parliament itself. The EPP is projected to have 212 seats in the parliament, compared to 185 for the Progressive Alliance of Socialists and Democrats (S&D), with the Liberal Democrat ALDE party set to come third with around 71 seats. Jean-Claude Juncker, the EPP's candidate to be the next European Commission President, said the projected outcome showed he should replace José Manuel Barroso, although his group will probably not have an absolute majority in the parliament.
"I want to the president of the next Commission because the EPP won," Juncker said.
"I won't go on my knees to the Socialists because we are the number-one party. "But we have to make comprises. I'd like to extend the majority to the Greens and the Liberals, but I won't ever go with the Far Right". Socialist candidate Martin Schulz, however, said he had not abandoned his ambitions of taking the helm of the EC.
"If Juncker's party comes first, he'll have the right to try to form a majority," said Schulz, the current speaker of the European Parliament. "If he wants to talk to us, he's welcome to. I'll take the initiative too to try to form a majority.
"I say enough of strategy based on mathematical calculations. It's time to start with political calculations". Turnout in the election was 43.1%, according to provisional European Parliament figures - up on last time.