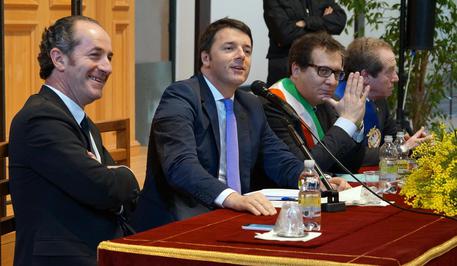 (ANSA) - Rome, May 21 - Premier Matteo Renzi appealed to the Italian people not to vote for "clowns" in Sunday's European elections. The broadside by the head of the centre-left Democratic Party (PD) was aimed at comedian-turned-politician Beppe Grillo and his anti-estasblishment 5-Star Movement (M5S). The PD is top in most polls, but Grillo is confident his M5S, who are second in the surveys after capturing a stunning 25% of the vote in last year's general election, can come first with a late surge.
"We don't need shows and clownery in the European parliament, we don't need to climb on the roof," Renzi said on Italian radio referring to a recent M5S protest on the roof of the Italian Lower House. "We need seriousness, people who are well prepared and further Italy's interests".
Renzi also blasted the language used in the campaign by Grillo, who, among other things, suggested that the premier will suffer a political "lupara bianca" - a term used to refer to a mafia hit that leaves no trace of evidence - after the European elections.
"Italy deserves more than insults and shouting and cries of up yours," said Renzi, who has embarked on an ambitious programme of institutional and economic reforms since unseating his PD colleague Enrico Letta in February to become Italy's youngest premier at 39. "Shouting gives you a good feeling for five minutes but then you go back to everyday life". Renzi also tried to stress that the PD represents the real face of change, which he says will not be achieved via the uncompromising positions of the M5S, whose stated aim is to destroy the current party system.
"I want to change the country with great determination, humility and serenity," the premier said.