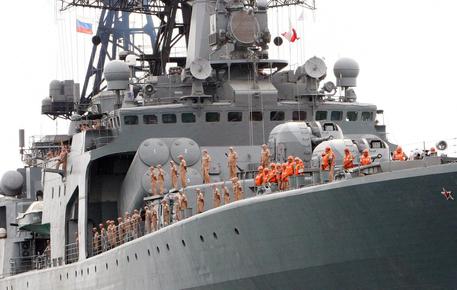 (People's Daily Online) - Beijing, May 21 - The naval forces of China and Russia are scheduled to conduct the "Joint Sea-2014" drill in the northern waters and aerial space of the East China Sea from May 20 to 26.
The navy of China sent three guided missile destroyers, Zhengzhou, Harbin and Ningbo, two guided missile frigates, Yantai and Liuzhou, the comprehensive supply ship Qiandaohu, new-type guided missile speedboats, two submarines, multiple-type fixed-wing warplanes, and ship-borne helicopters to participate in this drill.
The Russian Navy's six participating warships arrived in Shanghai on May 18. The guided missile cruiser Varyag, the anti-submarine ship Admiral Panteleyev, the destroyer Bystry, and the landing ship Admiral Nevelskoi are the main battle ships of the Pacific Fleet of Russia.
The drill will test the two parties' capabilities to launch joint operations such as anti-ship strike, anti-submarine combat and rescue of hijacked vessels.
This will be the third such exercise after joint drills held off the coast of Russia's Far East in July 2013 and in the Yellow Sea in April 2012.