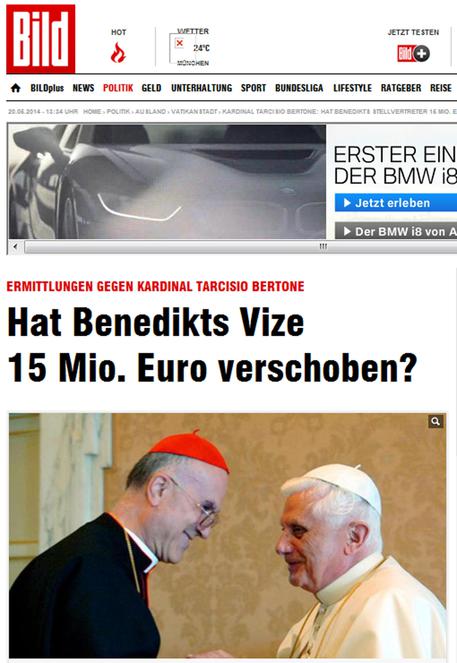 (see related) (ANSA) - Vatican City, May 20 - Former Vatican secretary of state Cardinal Tarcisio Bertone on Tuesday denied reports he embezzled 15 million euros from Vatican accounts, saying the transaction in question went through "normal" channels.
German daily Bild reported Tuesday that Vatican prosecutors have opened an investigation into the allegations against Bertone, citing unofficial Holy See sources. The newspaper said the money went to a television producer friend of Bertone, later identified as Lux Vide owner Ettore Bernabei, a former director-general of Italian public broadcaster Rai.
It said it was transferred in December 2012 despite resistance from the Vatican Bank.
Bertone maintained the report was an "invention", adding that the transaction was conducted in a "normal" manner and that former pope Benedict XVI "had been informed of the financial transaction at Lux Vide". "I repeat there is no problem," said Bertone. ANSA was told by Lux Vide producers Matilde and Luca Bernabei that they repaid the convertible bond with Lux Vide shares to a value they said was estimated by international accounting firm Deloitte.
Lux Vide, they said, is 52% controlled by the Bernabei family and ended fiscal 2013 with revenues of approximately 41 million euros.
The cardinal had been appointed Vatican secretary of state by Benedict in 2006 and served in the position until last year, when Pope Francis replaced him with Cardinal Pietro Parolin.
During Bertone's time in the role, the Vatican was rocked by the so-called VatiLeaks scandal which saw confidential Church documents leaked to the media by the Benedict's butler in 2012.
As well, earlier this year, Pope Francis shook up administration of the scandal-plagued Vatican bank, replacing four members of a five-cardinal oversight committee.
Bertone was among those ousted after less than a year into the start of their five-year mandate started under Benedict.
Much of the damage to the image of the Vatican bank, officially known as the Institute of Religious Works (IOR), happened under Bertone's command, when it came under scrutiny for allegedly not doing enough to prevent money laundering.