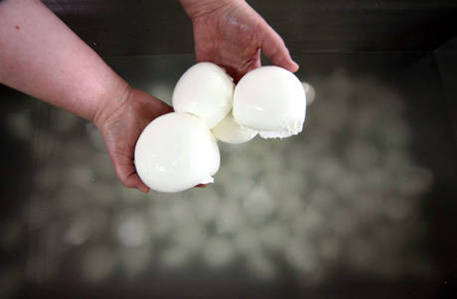 (ANSA) - Naples, May 14 - Police on Wednesday placed the owner of one of Italy's leading mozzarella companies under house arrest on suspicion of criminal association, money laundering, and obstruction of justice. Investigators believe that beginning in 1983, Giuseppe Mandara, 68, a third-generation mozzarella producer of the Campania region's trademark cheese, expanded his dairy empire with help from the La Torre clan of the Camorra mafia, eventually becoming known as the Mozzarella King.
Mandara's dairy company is based in the town of Mondragone, where the La Torre clan operates. The clan allegedly drove Mandara's business rivals off neighboring dairy farms and paid off his company's debts to the tune of 700 million lire (approximately 360,000 euros). Prosecutors also claim Mandara stonewalled an investigation into the 1990 mob slaying of agribusiness owner Antonio Nugnes, who was the deputy mayor of Mondragone at the time. Boss Augusto La Torre had him shot to death for refusing to collaborate with the clan, and threw his body into a 40-meter well. La Torre turned State's witness in 2003, when he led investigators to the dump site of Nugnes' body.
Mandara has already been arrested once, in July 2012, on charges of mafia association and counterfeit mozzarella production. The Mozzarella King beat that rap, but investigators now have new evidence thanks to testimony from various State's witnesses and phone taps.
Also on Wednesday, a regional coordinator from ex premier and tax-fraud convict Silvio Berlusconi's center-right Forza Italia party defended the Mozzarella King.
"Mandara is a gentleman and an entrepreneur who produces wealth and employment, and yet he has been treated like a criminal for the past two decades", said Amedeo Laboccetta. "How long does this manhunt have to go on?"