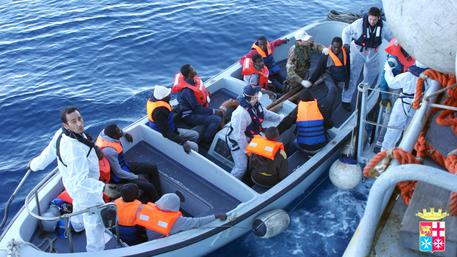 (See related) (ANSA) - Rome, May 12 - A boat packed with migrants sank Monday about 100 miles off the coast of southern Italy, killing at least 14 while about 200 others were rescued, the Coast Guard said.
The wreck follows a similar sinking off the coast of Libya on Sunday, in which roughly 40 European-bound migrants died. The European Union said Monday it was shocked by the latest migrant deaths over two days south of Italian coast and urged member states to "show solidarity" in dealing with the crisis. Commissioner Cecilia Malmstrom said the EU's council of interior ministers would discuss the issue at its next meeting.
Monday's sinking occurred about 100 miles off the coast of southern Italy near an offshore Libyan oil derrick after a nearby merchant ship was alerted to its unsafe conditions, officials said.
In a program called Mare Nostrum (Our Sea), Italy has ramped up search-and-rescue missions around its sea boarders since last October when two wrecks off the coast of Sicily killed roughly 400 migrants. Italian Red Cross President Francesco Rocca called for the creation of a "humanitarian corridor" which he said was "urgently" needed in response to the sinkings.
"This time we don't want tears and declarations of intent," said Rocca, who explained such a corridor would allow safe access for refugees from war and hunger to cross the Mediterranean to Europe. "There must be immediate intervention and without wasting time," he said, adding that the Mare Nostrum operation should be a European mission rather than being primarily an Italian responsibility.
He called on greater support for rescue and resettlement efforts from the European Union.
Last week, as many as 1,000 migrants landed in Sicily, the latest arrivals adding to the total of about 30,000 rescued since the start of the Mare Nostrum operation, according to figures released last Wednesday by Defence Minister Roberta Pinotti.
Most of these are from sub-Saharan Africa including war-torn countries like South Sudan, while an increasing number are from Syria and the Palestinian Territories.
The interior ministry said earlier this month that 800,000 asylum seekers were "poised" to set off for Europe from North Africa.
Issues around migration, including the rescue and care of illegal migrants, is a hot-button issue in Italy where last week a row erupted between the anti-immigrant Northern League and the interior ministry.
Northern League leader Matteo Salvini called Interior Minister Angelino Alfano "inept" for not halting the "invasion" of Italy.
"Italy is suffering an unprecedented invasion and you're not doing your job; resign for the sake of Italians," Salvini said after visiting an overflowing migrant centre in Rome.
The League leader said Italy needed a referendum to make entering Italy illegally a criminal offense again, as it was until a League-led law was repealed last year.
Salvini also said the migrants were "getting food and accommodation that Italians don't get".
Alfano said that the Europe will have to do more to support Italy, which is on the front lines of the sea arrivals of migrants.
Mare Nostrum has a monthly budget of 9.3 million euros, of which seven million are earmarked to keep coast guard and Navy vessels, helicopters and other vehicles and equipment running, while the rest is allocated to personnel, Alfano said