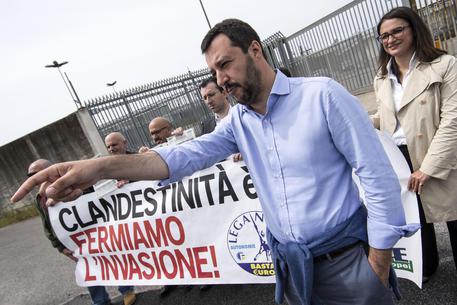 (ANSA) - Rome, May 7 - A row between the anti-immigrant Northern League and the interior ministry erupted Wednesday as 1,000 migrants landed in Sicily, the largest recent ripple in a wave of arrivals that has surged since the deaths of 400 asylum seekers spurred a take-all-comers rescue operation last year.
"Resign, you're inept," Northern League leader Matteo Salvini told Interior Minister Angelino Alfano.
"Italy is suffering an unprecedented invasion and you're not doing your job; resign for the sake of Italians," Salvini said after visiting an overflowing migrant centre in Rome.
The League leader said Italy needed a referendum to make entering Italy illegally a criminal offense again, as it was until a League-led law was repealed last year.
Salvini also said the migrants were "getting food and accommodation that Italians don't get".
Alfano, who has been subjected to repeated criticism by the League, did not reply.
One migrant was found dead aboard one of the several rickety boats saved by the Navy overnight.
According to figures released by Defence Minister Roberta Pinotti Wednesday, almost 30,000 migrants have been rescued since the start of the Mare Nostrum (Our Sea) operation, launched last autumn.
Most of them are from sub-Saharan Africa including war-torn countries like South Sudan, while an increasing number are from Syria and the Palestinian Territories. The interior ministry said last week that 800,000 asylum seekers were "poised" to set off for Europe from North Africa.
People traffickers have been getting ever richer pickings from people who scrimp in slave or sex labour to pay their passage to a better life, observers say.
The departures increased sharply after Libya collapsed into lawlessness following the fall of strongman Muammar Gheddafi. Italy reduced arrivals to a trickle under a controversial 'push-back' deal with Gheddafi, similar to Australia's policy of turning back boat people.
PINOTTI DEFENDS MARE NOSTRUM.
Pinotti on Wednesday defended Mare Nostrum from the Legaue's criticism, saying it was not too expensive and had a time limit.
The migrant surveillance and rescue operation has saved 27,790 lives since it was set up in October last year, Pinotti told parliament.
"Of those rescued, 3,034 were minors, and 93% left from Libya, a country that is still unstable. Some 207 human traffickers have also been arrested or reported", the minister told MPs.