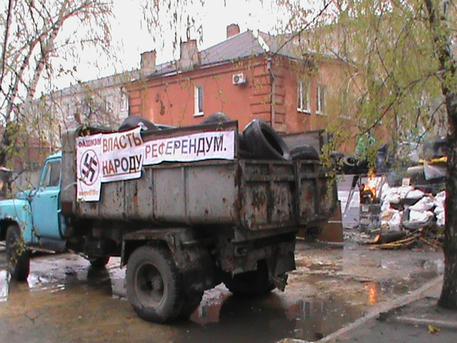 (ANSA) - Kiev, May 6 - Over 30 pro-Russian militants were killed and dozens more were injured Monday in heavy clashes with Ukraine forces in the east of the country, Ukrainian Interior Minister Arsen Avakov said on Tuesday.
The rebels had earlier reported a dozen dead and between 20 and 25 wounded in the fighting just outside the separatist stronghold of Sloviansk.
The victims included numerous fighters from the eastern Crimea region, which seceded from Ukraine and was subsequently annexed by Russia in March, as well as Russians and citizens of the Chechen Republic, Avakov said.
The minister also confirmed that four Ukraine soldiers died and a further 20 were wounded in Monday's clashes. Meanwhile French President Francois Hollande warned of "chaos and the risk of civil war" in Ukraine if presidential elections do not go ahead as planned on May 25.
On that day Ukrainians are due to elect a replacement for Russian-backed Viktor Yanukovych, who was toppled in February following months of increasingly violent protests over his decision to spurn the European Union in favour of closer ties with Russia.
The problem, said Hollande, is to "ensure that the president who wins the elections is legitimate in everyone's eyes".
This, he added, is something that "(President) Vladimir Putin and the Russians don't want".
Putin "needs to come under pressure from the whole of Europe", Hollande concluded.
On Tuesday Ukraine media reported that 48 people were still unaccounted for following the May 2 clashes between pro-Russian activists and government supporters in the eastern city of Odessa. The clashes culminated in a fire in a trade union building in which dozens of people died.