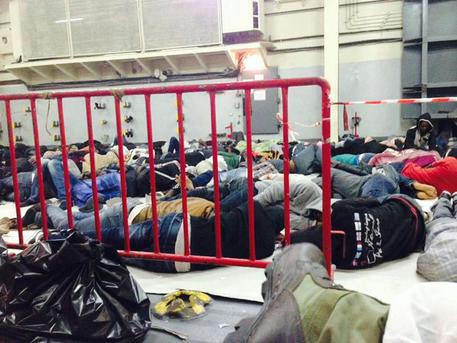 (By Denis Greenan).
(ANSA) - Rome, May 2 - Italy's migrant centres braced to go even further over capacity as fresh waves of immigrants approached from North Africa Friday.
"The system is under extreme strain and could collapse entirely if the EU doesn't help us share the load more fairly," said Interior Minister Angelino Alfano.
Almost 1,200 asylum seekers landed in Sicily Friday, bringing to almost 2,000 the latest in a wave of new arrivals swollen by good weather and a sweeping new rescue operation launched after 400 migrants drowned in two disasters last year.
An Italian Navy ship, part of the major Mare Nostrum search-and-rescue op, reached the port of Augusta where the 1,170 migrants will disembark and be processed.
The migrants, from various North African countries, were picked up Thursday close to the stepping-stone island of Lampedusa.
Mare Nostrum is credited with saving almost all lives of the recent migrants who brave the perilous crossing towards a better life in Europe.
But Italy says it will be overwhelmed by almost one million desperate people massing on the North African shores, and has made the umpteenth appeal to the EU for help in coping with the emergency.
Separately Friday, more than 300 North African asylum seekers were rescued south of Sicily and taken to the port of Messina.
And even earlier on Friday the Navy rescued 358 migrants in the Sicilian Channel between Italy and Africa.
The migrants, who are bidding for refugee status, included 43 women, one of them pregnant, and 24 children.
The asylum seekers said they came from Mali, Ghana, Niger, Sudan, Syria and the Palestinian Territories.
The Navy ship was rerouted from Ragusa to Palermo after it became clear that migrant centres at Pozzallo near Ragusa were overflowing.
"There's simply no capacity left there, and it looks like getting worse," the interior ministry said.
In better news, an Egyptian people trafficker was arrested in Ragusa after ferrying hundreds of migrants close to Sicily.
The 34-year-old is said to have demanded thousands of euros in 'bills of passage' from his human freight, and is suspected of abusing them physically and sexually during the trip.