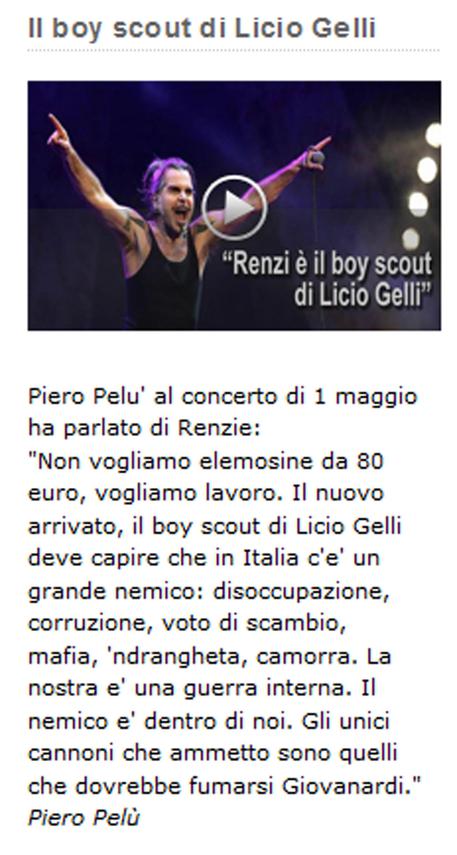 (adds background).
(ANSA) - Rome, May 2 - Florentine rock singer Piero Pelù on Friday drew fire from a number of MPs belonging to the centre-left Democratic Party (PD) after dismissing as "alms" a government measure to provide low earners 80 euros more per month.
"Offensive words from Pelù. For him, those who earn 1100 euros per month are beggars. The 80 euros per month are not alms for anyone who is not a millionaire and can't get to the end of the month," said PD MP Alessia Rotta, who was one of roughly a half dozen prominent PD politicians to join the outcry.
"We would have expected an apology from the Florentine rocker, we would have expected apologies to the many workers for whom this measure represents a breath of oxygen".
"Instead Pelù, not satisfied at having offended millions of Italians, continues his harangue. He should instead come down from the stage and drop into the real life of people".
Pelù sparked ire by saying, "We don't want 80 euros in alms. We want work" at a traditional May 1 concert in Rome.
Pelù was making reference to Italian Premier Matteo Renzi's signature 80-euro-a-month bonus for 10 million low earners, which was part of a tax-cut measure approved earlier this month.
Renzi is the head of the PD.
Pelù wrote on Facebook on Friday that he did not mean to offend low earners who will benefit from the measure, but rather to criticize the government for not doing more and for failing to address causes of their hardship.
The rock god and Renzi have a history of run-ins over concerts in Florence, where the premier was mayor until taking over as PD leader three months ago.