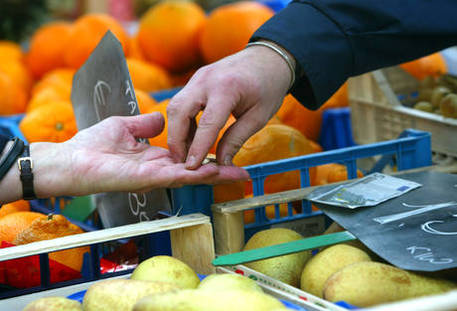 (ANSA) - Rome, May 2 - Italian households are tightening their belts after a "dramatic" rise in food costs between 2013 and 2014, two consumer associations said Friday.
"The minimum weekly food bill for a family of four is 124 euros, 3% higher than 2013, " said Adusbef and Federconsumatori.
"Unless there is serious intervention aimed at raising families' purchasing power, a typical household will be forced to make a drastic spending review this year, cutting its food outlay by around 376 euros," they said.
Another consumer group, Codacons, said earlier this week that while Italy's annual rate of inflation remains relatively low, a small but steady increase is taking an average of 201 euros each year from family budgets.
"This is worrying, especially considering that consumption continues to fall," which together with lingering weakness in prices, demonstrates that the Italian economy remains weak, the group said.
Its statement came as national statistical agency Istat said that preliminary data showed Italy's annual inflation rate increased to 0.6% in April from 0.4% in March, the first rise recorded in 10 months.
The country emerged from its longest postwar recession in the second half of last year but the recovery is fragile, as the agency reported that on a monthly measure, inflation was up just 0.2% this month over March.
Looking at a subset of the items included in the overall inflation measure, estimates showed that the prices of food, household goods and upkeep, as well as personal items actually decreased this month by 0.1% compared with March, and grew by 0.4% when measured on an annual basis.
That was a slower annual rise in that subset of goods compared with the 0.7% annualized gain reported in March, and the lowest level since August 2010.
The gradual rise in inflation is costing a retired couple an average of 173 euros per year, said Codacons, while a single pensioner is losing 111 euros each year due to rising prices.