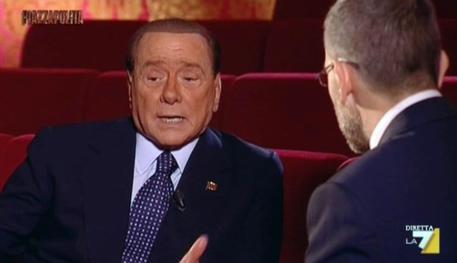 (see related stories) (ANSA) - Milan, April 29 - Judicial authorities are looking at comments Silvio Berlusconi made on Italian television Monday, in which he described as "ridiculous" his conviction for tax fraud at his media empire and his punishment of having to do community service at a centre for the elderly near Milan, ANSA sources said Tuesday. Berlusconi has been warned he could be forced to serve the year remaining on the four-year sentence for fraud at his Mediaset broadcasting empire under house arrest, rather than by doing community service, if he continues to "defame" judges, after repeated claims that left-wing elements in the judiciary are seeking to wipe him from Italy's political arena.
Earlier on Tuesday the 77-year-old billionaire repeated his claim that the tax-fraud sentence, which led to him being ejected from parliament and declared ineligible to stand in next month's European elections, amounted to a "coup". "The Mediaset sentence was another coup that was used to kick me out of the Senate and make me unable to stand for six years," the three-time premier told one of his Mediaset TV channels. "It has taken out the leader of the centre right, the only person who managed to keep the moderates together," added the 77-year-old billionaire, who continues to lead and campaign for his Forza Italia party from outside parliament.