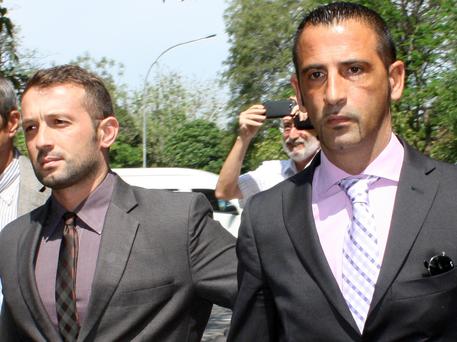 (supersedes previous).
(ANSA) - Rome, April 24 - Italy on Thursday opened a new phase in the saga of its two marines being held in India for allegedly killing two fishermen two years ago, replacing its special envoy on the case and sending its ambassador back to New Delhi to help steer the case towards arbitration. Defence Minister Federica Mogherini told the Senate Rome has sent a note to New Delhi as it opens an "international procedure" that, unless the Indians cooperate, would inevitably lead to arbitration by an international body such as the UN.
Rome has decided to send its ambassador to India back to New Delhi to mark the "fresh stage" in its efforts to have Massimiliano Latoree and Salvatore Girone returned, Mogherini added. Daniele Mancini will oversee the "new phase" of internationalising the case, she said.
Special envoy Staffan de Mistura has done his job and new figures are needed now that Rome is taking the case to the international level, Mogherini told the Senate. "I want to thank de Mistura for the dedication and indefatigable commitment with which he has followed the affair," she said. "We need new figures, we are mapping out a panel of experts under the leadership of a coordinator to pursue the new phase". The prospect of international arbitration appeared inexorable, the minister told the Upper House.
"We are off the bilateral level, to raise the dispute to an international level: we are still willing to talk to the Indians" but "we have no other option than resorting to international arbitration," she said.
Rome does not consider the India proceedings, which have yet to lead to trial, "valid", she said.
"We do not accept a (future) Indian trial whose validity we do not recognise," Mogherini said.
Latorre and Girone are still awaiting trial over the deaths of Valentine (aka Gelastine) and Ajesh Binki, whom they allegedly mistook for pirates.
Italy is currently appealing to India's top court against NIA anti-terrorism prosectors taking the case.
Rome has also requested the pair be allowed to return home and the whole case be dropped.