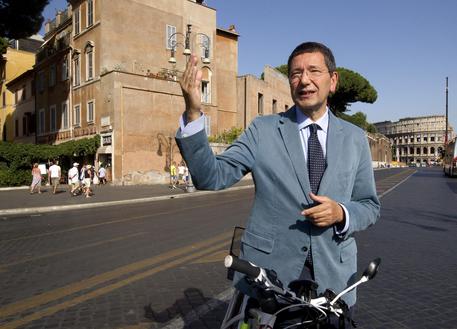 (ANSA) - Rome, April 16 - Rome budget chief Daniela Morgante on Wednesday quit after weeks of squabbling with Mayor Ignazio Marino over a half-a-million-euro hole in the city's finances. Marino blames the previous administration of right-winger Gianni Alemanno for the financial chasm but ex-premier Silvio Berlusconi's Forza Italia party says it dates back to a string of centre-left mayors.
The government was forced to step in to fill some of the hole after Marino warned the Italian capital would grind to a halt, menacing the canonisation of two popes later this month, unless it got a key capital injection. Last week the government passed its so-called 'Save Rome' decree after putting it to a confidence vote Thursday. The cabinet of Premier Matteo Renzi on February 28 approved the decree granting provisions for basic services in Rome after Marino's warning.
Without the injection of funds Rome risked losing bus service, crucial road repairs, and even the ability to host the April 27 canonisation of popes John XXIII and John Paul II, according to Marino.
Renzi's showdown with Marino, a member of his ruling Democratic Party, was one of his first big tests as premier since ousting PD colleague Enrico Letta in February.
Marino said Morgante's departure will have no affect on the government's 2014 budget. When asked if he now planned to restructure his administration, Marino had no comment.