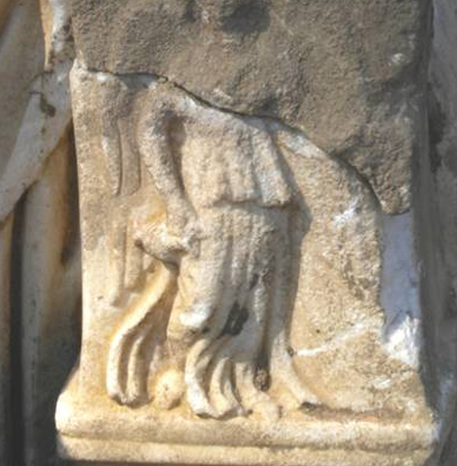 (ANSA) - Rome, April 16 - A "secret" part of the ancient Roman port of Ostia has been unearthed and is "bigger than Pompeii," Rome's archaeological superintendency said Wednesday.
The "exceptional results" reveal that Rome was "split in two by the Tiber River in the First Century BC," it said.
The find is enormous, including towers and warehouses as well as boundary walls that scholars say had been missing from what had been previously recovered from the popular site located on the southwestern edge of Rome.
Experts from Italy and Britain were involved in the discovery, using special equipment to identified buried ancient walls, road layouts and structures buried beneath the earth.
The finding sheds new light on how important Ostia was to trade in the first 200 years of the millennium, said Mariarosaria Barbera, superintendent of Rome's archaeological heritage. "The presence of large storage areas in the part of Ostia north of the Tiber reopens the issue of the size of the trade that took place on the banks of the river," where the Tiber flows into the sea.
Ostia, which some Ancient Rome buffs prefer to Pompeii, has been yielding surprising finds in recent years. Last July, a Roman mausoleum and domus (house) emerged from under a "mini-dump" of tin cans in a park at the ancient port.
The head of Ostia's archaeological superintendency, Paola Germoni, and the American Institute for Roman Culture's director, Darius Arya, presented the find.
Germoni said the two bodies had worked with students from 14 US universities on two parts of the park.
"They found a circular-plan mausoleum clad with travertine blocks which had its initial stage between the end of the first century BC and the start of the first century AD, with stages of re-use up till the fifth century AD," she said.
"Furthermore, a wall structure from late antiquity was discovered under the humus of the park and the illegal waste dump which revealed a beautiful polychrome marble-covered pavement, from the fourth-fifth century AD.
"We believe it was a domus, whose level of pavement work denotes a certain refinement," Germoni said.
More than two years before the rubbish find, in April 2011, an ancient ship emerged from the ground at the Imperial Roman port of Ostia in a find then-culture minister Giancarlo Galan said "gives you goose bumps".
An 11-metre section of one of the ship's sides has so far been discovered, archaeologists said.
They and Galan said the discovery would make experts think anew about the exact location of the port where the Roman empire's biggest fleet was stationed and through which goods travelled to and from the imperial capital.
"This great result tells us a lot of things about the ancient coastline and what was happening about 2,000 years ago," said Galan.
Archaeologists said they were expecting to find something in the area, where a major road bridge is being rebuilt, and had launched a programme of so-called 'preventive archaeology'.
Site director Germoni stressed that this type of work "enables us to combine the demands of conservation of ancient artefacts with the needs of the general public".
She said the discovery "would plausibly move back the ancient coast line some four kilometres from where it is now".
Silt and river movements have pushed back the area of the once-bustling port, which is now a major archeological site called Ostia Antica, the best-preserved ancient Roman town outside Pompeii.
Although it attracts far fewer visitors than Pompeii, many enthusiasts say it offers a similar thrill and feel of ancient life.
Anna Maria Moretti, archaeological superintendent for Rome and Ostia Antica, said the ship find was "a novelty because at that depth, about four metres below the topsoil, we have never found a ship, only layers (of buildings) and one single structure".
"At the moment we only have a sizeable chunk of one side (of the ship), neither the poop nor stern".
She also said there were "remains of ropes and cables" in the ship.
"Restoring the vessel will be an extremely delicate operation," Moretti went on.
"We're keeping it constantly covered in water so that the wood doesn't dry out.
"The wreck must be treated with highly sophisticated preservation techniques," Moretti said.
Several Roman ships were found during the construction of the nearby Fiumicino Airport in the 1950s and are now housed in a museum at Ostia Antica.
Ancient Roman Ostia, at the since-moved mouth of the River Tiber, was built into a massive complex under the Emperor Claudius and given the name Portus, meaning port.
It was expanded under successive emperors such as Trajan and Hadrian and served as a base for many of the empire's greatest expeditions.
Ostia was also the depot channelling the vast wealth, grain and other supplies needed to feed the appetites of the imperial city.