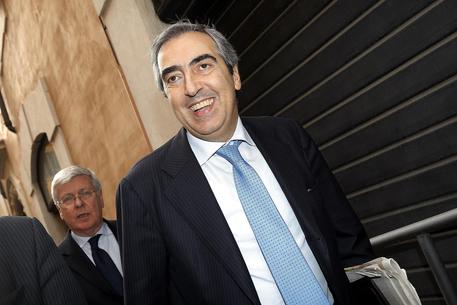 (ANSA) Rome, April 16 - Hardline right-wing MP Maurizio Gasparri was indicted Wednesday for allegedly embezzling some 600,000 euros from state funds to Silvio Berlusconi's now-defunct People of Freedom (PdL) party.
Judge Cinzia Parasporo ordered Gasparri, a former member of the neo-Fascist MSI party who later became an ardent Berlusconi supporter, stand trial October 1 on charges of filching the money to buy himself a life insurance policy.
Gasparri subsequently paid back the cash in two tranches after he was busted for the alleged embezzlement. According to the indictment the investigation headed by Judge Alberto Pioletti established that: "(Gasparri), having access to sums of money from the Senate budget allocated as contributions to the workings of the office of the leader of his parliamentary group, helped himself to 600,000 euros using them to buy an insurance policy in his own name valid for his entire lifetime and for his beneficiaries in case of death".
Berlusconi dissolved the PdL and revived his first party, Forza Italia, after a pro-government group peeled off last year, refusing to bring down the executive when the ruling Democratic Party (PD) insisted on enforcing a ban from office for the three-time premier and media magnate because of a tax-fraud conviction.