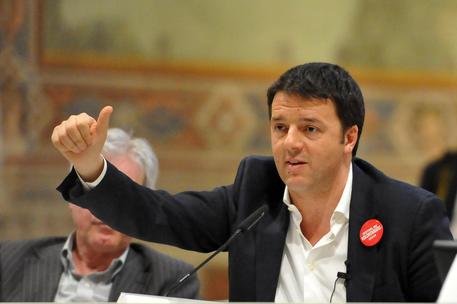 (By Denis Greenan).
(ANSA) - Rome, April 15 - Premier Matteo Renzi on Tuesday shored up an electoral and Constitutional reform pact with ex-premier and conservative leader Silvio Berlusconi despite continued dissent from a minority faction in his Democratic Party (PD).
Renzi's pact with Berlusconi for reforms to overhaul Italy's slow-moving, costly political apparatus was described as "solid" by both sides after the pair met for talks late on Monday.
Renzi won the agreement of ex-premier Berlusconi for the reforms at a meeting in January, a month before he toppled Enrico Letta, his colleague in the centre-left Democratic Party (PD), to become Italy's youngest-ever premier at 39.
But in recent weeks there has been speculation that Berlusconi, the leader of the opposition centre-right Forza Italia (FI) party, could break the agreement.
Earlier this month the 77-year-old media magnate said parts of the government's bill to change the Constitution to transform the Senate into a leaner assembly of local-government representatives with minimal lawmaking powers were "unacceptable".
FI has also been grumbling about the fact that a bill for a new election system, which was also the result of an agreement between Renzi and Berlusconi, has not made progress in the Senate after clearing the Lower House.
But Berlusconi said that "the pact is solid" during a call to an FI fund-raising event after his meeting of over two hours with Renzi Monday.
He added that "there is an excellent personal relationship" between the men.