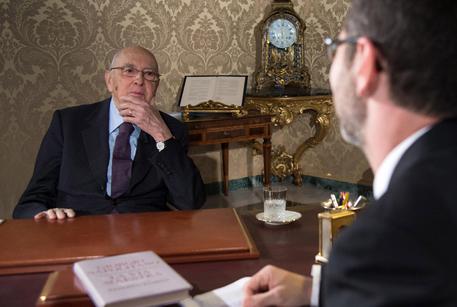 (ANSA) - Rome, April 14 - Italian President Giorgio Napolitano says he is not fazed by an apparent rise in Euroskepticism ahead of European elections. In an interview for Sunday chat show Che tempo che fa, the head of State said the roots of the European Union were too strong and deep to be seriously threatened by anti-European sentiment. "There's disappointment, because amid the unprecedented global economic crisis the EU was late to respond...and it failed to develop a direct rapport with citizens," he said. Now, as Euroskeptic parties such as the 5-Star Movement of comic-turned-politician Beppe Grillo are expected to do well at May 25 European elections, Napolitano said "the fear is that the European Parliament would become difficult to govern". "But I don't believe in a Europe moving backwards," he added. "By now what's been built between (European) societies, economies, cultures, and even judicial systems cannot be destroyed, not even by those who doggedly want it". Napolitano went on to say that stronger leadership was needed at the European level, perhaps through direct elections for an EU president.