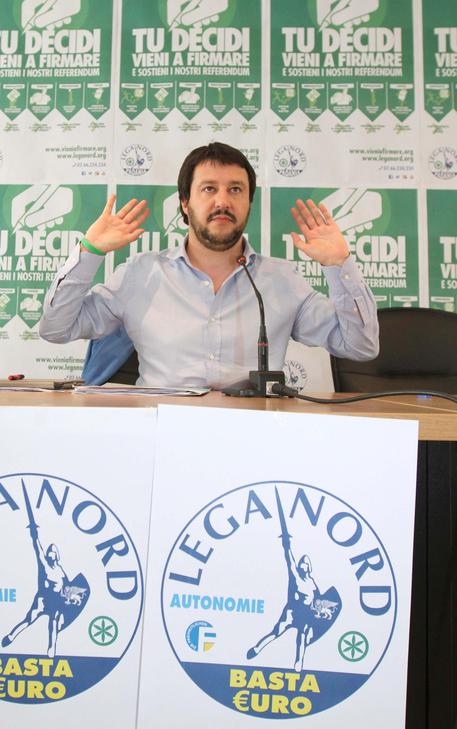 (ANSA) - Venice, April 11 - Matteo Salvini, head of the regionalist Northern League, said Friday that there is a possibility one member of a group of jailed Venetian separatists could be asked to stand as a League candidate in next month's European parliamentary elections.
Almost two weeks ago, 24 Veneto region separatists were arrested on suspicions of criminal association for terrorism and subversion of the democratic order after they tried to use a souped-up tractor in a demonstration calling for a separate country of Veneto. An Italian prosecutor said that the separatists were planning an "insurrection" to obtain independence for the region around Venice.
"They proposed independence from the Italian State by using violent methods and insurrection," said Brescia Prosecutor Tommaso Buonanno after the arrests.
That doesn't seem to concern the League, which has said that the prosecution of separatists was an infringement of their basic rights.
Salvini said "there is a possibility of one being a candidate" for election to the European Parliament.
The connection between the separatists and League is longstanding. The Liga Veneta (Veneto League) separatist party was a founding member of the Northern League, a federation of regionalist parties which has recently upped its drive for greater autonomy for wealthy northern regions and started calling for outright independence again, the original demand of its early years.
Meanwhile, Salvini, whose party is opposed to what it sees as excessive immigration, said that he plans to meet on Tuesday with Marine Le Pen, leader of the ultra right-wing National Front in France which has recently had success in local elections.
Salvini said the meeting in Strasbourg is aimed at agreeing on a "common strategy" for Europe to deal with waves of "unwelcome" illegal immigrants arriving on Italian shores.
Earlier in the day, the United Nations High Commissioner for Refugees (UNHCR) said that the Italy navy has rescued as many as 6,000 migrants over the past four days alone, attempting a dangerous sea crossing to Europe.
It estimates that more than 40 boats crammed with migrants, many fleeing wars in the Middle East and Africa, have been rescued as they struggled to reach the coasts of Sicily and Calabria.