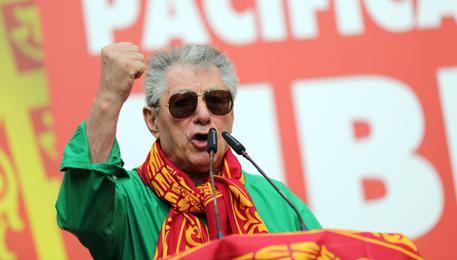 (ANSA) - Bergamo, April 11 - The disgraced former leader of the anti-immigrant Northern League, Umberto Bossi, was indicted Thursday for insulting President Giorgio Napolitano.
A prosecutor said the offence was aggravated by a "racial" slur because the often foul-mouthed veteran firebrand called the Naples-born Neapolitano a "terrone", northern Italian epithet for "dirty southerner".
On December 29, 2011, Bossi made a rally laugh when he sent a sarcastic greeting to the Neapolitan head of State, using the Latin tag "nomen omen" ("it's all in the name") to criticise his provenance from the troubled southern city.
"I didn't know he was a 'terrone'," he added to further chuckles.
Bossi, who stepped down as leader of the movement he founded after a string of corruption and nepotism scandals two years ago, is also charged with trying to bring Italy's institutions into disrepute.