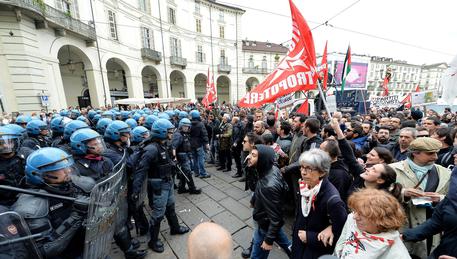 (updates previous).
(ANSA) - Turin, May 1 - One anti-capitalist protester was arrested and two others cited for attacking public officials after clashes with police in Turin Thursday marred Labour Day celebrations in the Piedmont capital.
About 40 'antagonist' demonstrators, including long-time protesters against a TAV high-speed France-Italy train line north of Turin, were caught up in the incidents, police said.
Seven police officers suffered cuts and bruises while one DIGOS security-police official was hit over the head with a pick-axe handle.
Police said they seized iron bars and sticks from the demonstrators.