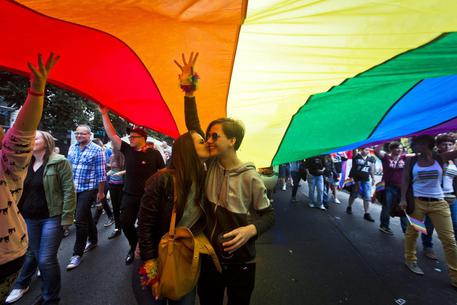 (ANSA) - Brussels, October 28 - People belonging to the lesbian, gay, bisexual and transgender (LGBT) community in Italy are among the most discriminated in Europe, according to a study by the European Union Agency for Fundamental Rights (FRA) published Tuesday.
Some 54% of LGBT people in Italy said they suffered discrimination, putting the country ahead of only Lithuania, Croatia, Poland and Cyprus. Further, just 8% are always open about their sexual orientation as a result of the hostility, FRA said. Italy also performed badly with regard to the use by politicians of offensive language, everyday jokes and the absence of legislation upholding gay rights. The study was presented on the occasion of the first-ever high-level EU conference on LGBT rights called by the current Italian presidency of the Council of the EU in Brussels. "The EU has a clear responsibility to promote equality, respect and tolerance for everyone, including LGBT people," said Italian Reforms Undersecretary Ivan Scalfarotto.
"With this important conference the Italian Presidency wants to show its commitment to working with our EU partners to combat LGBT discrimination and build a more inclusive society for all." "Too often, too many LGBT people face discrimination and hostility for simply being themselves," said FRA Director Morten Kjaerum. "The tide is changing and there has been positive momentum in many Member States. We must build on this. As the new European Parliament and Commission take office, the time is now ripe to put equality and non-discrimination of LGBT people back on the EU's agenda".