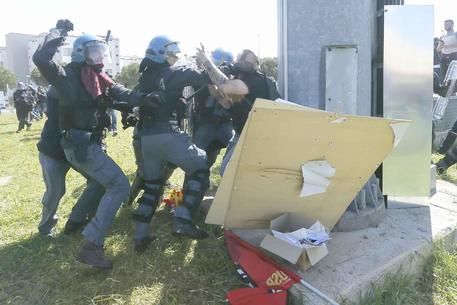 (ANSA) - Pisa, April 29 - Italian Premier Matteo Renzi on Friday said clashes between police and anti-government demonstrators in front of the National Research Council (CNR) were "fairly incomprehensible".
Renzi and Education Minister Stefania Giannini were at CNR as part of a celebration for the 30th anniversary of the first Internet connection in Italy.
"We're talking about how the Internet can help the country to create competitiveness. It's one of those things that makes no sense to fight over; on the contrary, as many people as possible need to be involved," Renzi said.
The clashes came after a peaceful march of about 500 people organized by labour unions, social centres and university collectives, joined by the group 'Victims of the Save-the-Banks.' During the march, protesters yelled slogans against the Renzi government and his Democratic Party (PD).
When protesters reached the cordoned-off space in front of CNR, police in riot gear launched baton charges in an attempt to push the demonstrators back.
The protesters responded by throwing objects and vegetables.