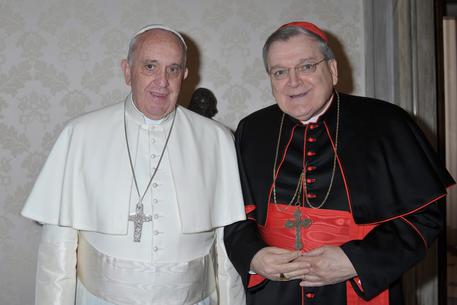 (ANSA) - Vatican City, February 16 - Pope Francis has sent one of his most vocal opponents, American Cardinal Raymond Leo Burke, to the island of Guam in the Pacific Ocean to investigate a complicated case of suspected paedophilia by the island's archbishop, 71-year-old Msgr Anthony Sablan Apuron. Apuron denies the charges, brought forth by a seminarian, of abuse in the 1970s.
Burke will remain on the island for the time needed to oversee canonical proceedings on the case, although at the end of the month he is expected to attend a conference in the US.
Catholic News Service said Burke arrived on Guam Wednesday.
Burke is one of four cardinals who signed the "dubia" letter to Pope Francis expressing doubts on his apostolic exhortation Amoris Laetitia, in particular regarding the issue of giving Communion to the divorced.
Two years ago Francis demoted Burke from the Vatican's highest court to a ceremonial philanthropic post.