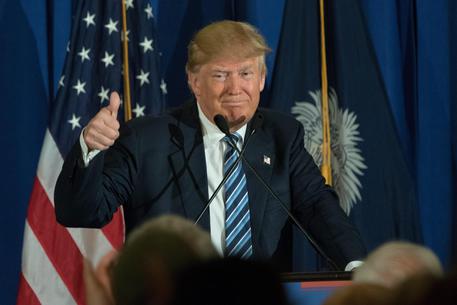 (ANSA) - Rome, February 19 - Donald Trump has attempted to soften his initial harsh response to Pope Francis's comment on Thursday that the US presidential hopeful is not a real Christian if he says walls must be raised against migrants.
During a town hall-style meeting broadcast on CNN Thursday evening, Trump said the pontiff's comments were "probably a little bit nicer" than the press first reported.
Trump said he believes the pontiff has only been given Mexico's version of events without being properly informed about the migration issues facing the US at the Mexican border.
ON Thursday, Trump had said it was "disgraceful" for Pope Francis "to question a person's faith", and claimed the pontiff was being used as a "pawn" by the Mexican government.
The pope's comments came during a question and answer session with journalists on the return flight from his Mexico trip, in which he was also asked about Italy's current debate on a civil unions bill.
To that, he said: "the pope doesn't get mixed up in Italian politics".
The pope also hinted that the Catholic Church could to some degree tolerate he use of contraception by women at risk of contracting the Zika virus.
The fast-spreading virus has been linked to the microcephaly birth defects in babies, which can cause development problems.
"We must not confuse the evil consisting of avoiding a pregnancy with abortion," Pope Francis told reporters.
"Abortion is not a theological problem. It is a human problem, medical. One person is killed to save another. It is evil in itself, it is not a religious evil, it is a human evil.
"Avoiding a pregnancy is not an absolute evil. In certain cases, as in this one, or in the one I mentioned of Blessed Paul VI, it is clear," he added referring to a predecessor's decision to allow nuns at risk of rape in Africa to use contraceptives.