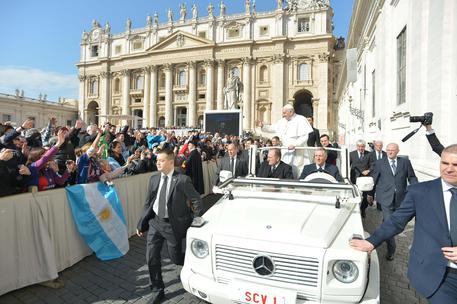 (ANSA) - Vatican City, March 18 - Pope Francis will donate over 500 kilos of food to a charity for poor people called Medicina Solidale which operates in the troubled Roman neighbourhood of Tor Bella Monaca, it was announced on Wednesday.
The pope's almoner, Konrad Krajewski, will directly oversee the gift of tomatoes, canned legumes, cheese, cereals and jams on Saturday morning. Pope Francis visited Tor Bella Monaca 10 days ago when he celebrated a mass in the Church of Santa Maria Madre del Redentore. "We were very surprised when we received the phone call," said Lucia Ercoli, who leads Medicina Solidale.
"The pope didn't forget about us and ten days after his visit he decided to give a sign of his closeness to those in need", added Ercoli.
http://popefrancisnewsapp.com/