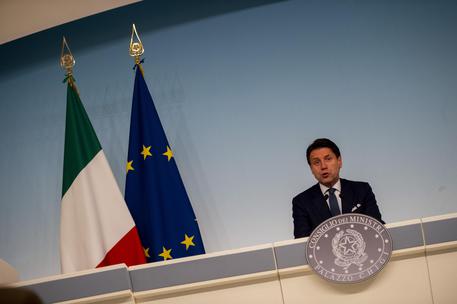 (ANSA) - Rome, August 9 - Premier Giuseppe Conte said that Deputy Premier Matteo Salvini is seeking to cash in on the popularity his League party currently enjoys, according to the opinion polls, by pulling the plug on the government and calling for early elections. "Salvini told me that he intended to interrupt this government experience to have elections in order to capitalise on the support the League currently enjoys," Conte told a press conference.
Conte announced that he would present himself before parliament, rather than resigning, saying it should be Lower House and the Senate that decides whether he still has their confidence, not just Salvini. The premier also said it is not up to Salvini to say when the government collapses and new elections are held. "I have read the the interior minister wants the parliamentarians to return to work at once," Conte said.
"It is not up to Salvini to summon the houses of parliament, it is not up to the interior minister to decide on the time frames of a political crisis in which many other institutional parties intervene". The premier also rejected Salvini's assertion that his 14-month-old executive has been dogged by "too many noes". "This government has always worked a lot and talked little," he said.
"It was not on the beach". He suggested that Salvini will have answer to parliament for his decision to bring down the administration. "I am confident that the passage through parliament will shed full light on the decisions made and the responsibilities that derive from them," he said. "We will have to tell all the Italian people the truth and we won't be able to hide behind rhetorical comments and media slogans".