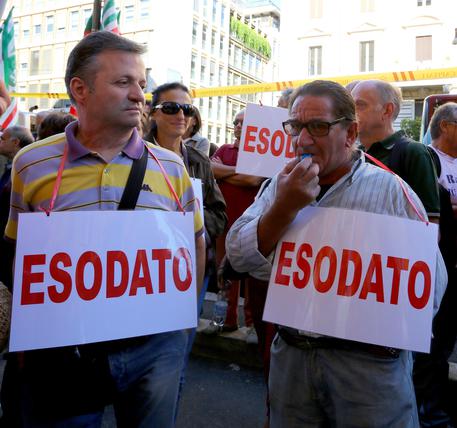 (ANSA) - Rome, September 24 - Premier Matteo Renzi's government said Thursday that it will take action to solve some of the unwanted aftereffects of a 2011 pension reform in its 2016 budget law.
The 2011, which raised the retirement age and increased the years of contributions needed to take early retirement, created the problem of the 'esodati' (exiled ones) - people who were left without pay or a pension after leaving jobs, as under the old rules, they were eligible to retire.
There have been six interventions on behalf of the 250,000 or more esodati but some 50,000 have still not been helped. "I confirm the will to intervene to safeguard the esodati in the budget law for a definitive solution," Poletti told a session of House and Senate labour and budget committees Thursday. Economy Minister Pier Carlo Padoan, meanwhile, said the government is aiming to introduce more flexible options for those seeking early retirement in a 2016 budget law. "The availability of margins of flexibility to adapt retirement decisions to individual needs is in itself a good thing that could be useful," Padoan told a parliament. "The government is committed to analysing the issue, starting from the budget law, and in a way that is compatible with the outlook of the public finances," he said. Padoan has said the executive is looking at ways to enable those close to retirement age quit work if they agreed to take a substantial cut in their monthly pension.
He added, however, that an ageing society like Italy's was likely to see a steady rise in the retirement age. Any changes to the pension system would have to take into account Italy's high level of debt and government plans to reduce it, he said. Men's pensions were on average 40% higher than women's last year, the head of pensions and social security agency INPS, Tito Boeri, told parliament Thursday. Closing the gender gap would entail reforming the system "without reinstating old prerequisites based on years of contributions paid in, which are advantageous to men," Boeri said.
"Age must be the central factor". The government, meanwhile, got some comforting news from economic data that suggests Italy's economic recovery is taking hold after years of recession. Italian industrial orders increased 0.6% in July with respect to June and by 10.4% compared to the same month in 2014, Istat said. The national statistics agency added that it was the second consecutive double-figure year-on-year rise. The sector that enjoyed the biggest increase was for transport vehicles, up 61.3%. The agency said industrial revenues were down 1.1% in July compared to June, but up 2.3% compared to July 2014. July orders increased 10.4% in one year," Renzi posted on his Twitter account with he hashtag #ciaogufi (#helloillwishers).
Istat said retail sales increased 0.4% in July compared to June and were up 1.7% with respect to the same year in 2014. Retail sales were up 0.7% in the first seven months of the year compared to the same period in 2014, with food products sales rising 1.3%.