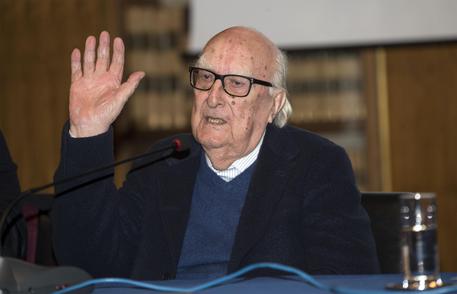 (ANSA) - Rome, June 17 - Italian writer Andrea Camilleri has been taken into Rome's Santo Spirito hospital in a critical condition, sources said on Monday. The creator of Inspector Montalbano, arguably Italy's most famous fictional detective, is thought to have suffered cardiac arrest.
The local ASL health agency said Camilleri had been admitted "in critical condition for cardiorespiratory problems" and was in intensive care.
The agency issued a medical bulletin at 17:00 local (15:00 GMT) confirming that Camilleri was in critical condition.
It said that he had been resuscitated and was on a respirator "with pharmacological support".
Camilleri had been preparing to make his debut at Caracalla's Baths in Rome with a version of his Self-Defence of Cain, on July 15. Camilleri, 93, became a best-selling author after he turned 60, and his books have sold millions of copies worldwide.
The TV adaptation of Montalbano's adventures, as well as a spin-off, The Young Montalbano, are big hits in Italy and around the world too.
Camilleri celebrated his 90th birthday in fine style three and a half years ago.
In honor of the occasion, Camilleri's original publishing house Sellerio is offering two special-edition ebook collections as well as two print collections.
The first ebook, 'Le indagini di Montalbano' (Montalbano's Investigations) contains all 23 Montalbano books, and the second, 'I romanzi di Vigata e altro ancora' (The Vigata Novels and Even More'), is a collection of 23 novels and other pages of stories that Camilleri set in the imaginary city of Vigata, where the Montalbano stories take place.
Both ebooks were on sale only through September 6, at a cost of 90 euros each.
A few weeks later, Sellerio released a limited-edition set called "I sogni di Andrea Camilleri" (Andrea Camilleri's Dreams), an anthology of dreams told in his novels together with a collection of 48 postcards of his Sellerio books.
Sellerio also released a celebratory volume called "Gran Teatro Camilleri" (Camilleri Grand Theatre), a series of essays about his work, written by critics and intellectuals.
Even the mayor of Sicilian town Agrigento, located just 10 minutes from Porto Empedocle where Camilleri was born, decided to celebrate the writer's birthday by starting the process for declaring Camilleri an honorary citizen.
Camilleri became a best-selling author after he turned 70, and his books have sold more than 30 million copies worldwide.
"I didn't think I was capable of enough imagination for such a long series, but I managed to do it," Camilleri told ANSA on the occasion of the 20th anniversary of Inspector Montalbano.
And of his famed character, Camilleri said, "He's a monument that's there, still destined to grow for a few years.
He'll end when I do".