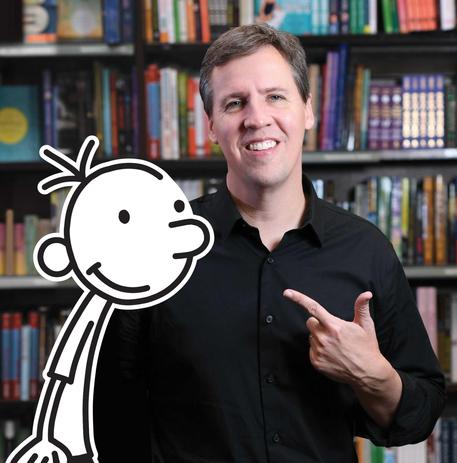 (ANSA) - Bologna, March 27 - The leading character of Jeff Kinney's hugely popular "Diary of a Wimpy Kid" has been transformed into a Neapolitan street urchin for "'O Diario 'e nu Maccarone".
The book, entirely in the Neapolitan dialect, was given a preview on Monday at the Bologna Children's Book Fair on the opening day of the fair's 55th edition. The translation, which will be in bookshops from May 10 as part of the Turin Book Fair, was the focus of a special event in the presence of Kinney, translator Francesco Durante and Michael Jacobs, chairman and CEO of the American publishing house Abrams, which convinced the writer to put 'Greg's story' into a children's book. Kinney told ANSA in an interview that he was surprised by the experience - which he said he was learning a great deal from - and that he hadn't even known of the existence of the Neapolitan dialect before, despite being familiar with the Naples region. He added that he was "discovering the world through and thanks to" his book and that he had been exposed to many situations and places that he would never have been to had he not written the book. He said he hoped that "Diary of a Wimpy Kid", which has thus far sold 200 million copies in 65 editions, would thus help him improve his cultural knowledge. Published by Il Castoro with an original cover designed by Kinney, the edition marks the 56th language in which it has been translated. Kinney said that initially he had thought of doing cartoon strips for newspapers and that he had received many rejections, since hw was able to draw only like a child and not like an adult.
He then spent 8 years working on what would become "Diary of Wimpy Kid" and after 13 he met with Michael Jacobs.
Kinney added that he was "lucky" in the end and that he liked the philosophy of Abrams, "which treats the book like a work of art". The book, translator Durante said, "has the power of the classics. It was written before children began spending three fourths of their lives looking at smartphones. This translation, which started off as a game and then became a nightmare because the Neapolitan language is a complex one, even as concerns the spelling. You are constantly having second thoughts because you do not always have the words you need." He added that it had proved, in the end, to be "the discovery of a new world", adding that the oral aspect is very important when dealing with dialects and that it would make an excellent audiobook.