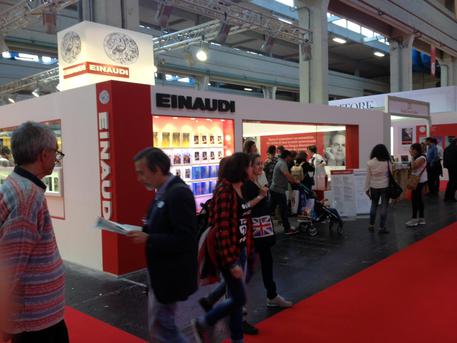 The success of the 28th Turin International Book Fair is an "encouraging sign" for Italy, the country's culture minister said.
As Dario Franceschini spoke, large publishers said that their sales during the event were "stable" but still well below previous figures.
At the same time, organizers announced that next year's event will include Saudi Arabia as its national guest of honour.
"The great success of 28th International Book Fair of Turin is an encouraging signal for the world of Italian culture," said Franchescini at the end of the five-day event.
There, large publishers including RCS and Mondadori said that sales were stable compared with 2014.
Feltrinelli reported a jump of 15% in sales, but publishing houses agreed that figures were far below the surges - some as high as 50% - reported in previous years.
Average sales increase was about 15%, publishers said.
As the event closed Monday, organizers said that Saudi Arabia will be the guest of honour in 2016, with a 300-square metre space to be dedicated to Saudi literature.
Germany was this year's national guest of honour.
The main theme of the 2015 book fair was The Wonders of Italy: Italian landscapes, UNESCO monuments and treasures, innovation, Italian creative expertise, and the country's place in the imagination of the new map of a globalized world.