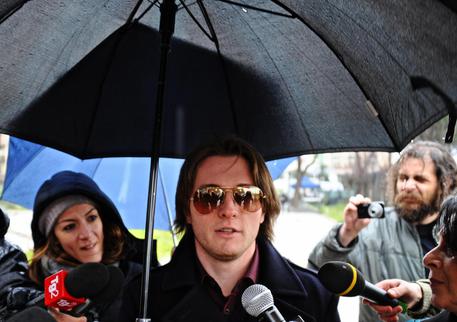 (ANSA) - Perugia, April 18 - Raffaele Sollecito on Thursday took his girlfriend to the Perugia house where he was convicted with Amanda Knox of murdering Meredith Kercher in 2007, local dailies reported Friday.
Sollecito is awaiting an explanation of a January 30 appeals verdict that gave him 25 years for the murder of the British exchange student, after which he will make a fresh appeal to the high Court of Cassation.
His ex-girlfriend Knox, who got 28 and a half years for slaying her then flatmate, is in America and will not return for the Cassation appeal. Sollecito's father said he "saw nothing wrong" in his son revisiting the murder scene. "If Raffaele wanted to show his girlfriend the ordeal he went through, I can't see anything wrong with that.
"He has absolutely nothing to do with that crime," Francesco Sollecito told ANSA. Knox and Sollecito were found guilty in a Florence court January 30 for the murder of Leeds University student Kercher, from Caulsdon in Essex.
The appeals-level verdict was the fourth ruling on the case and will now go to the Italian supreme court.
For fear of what she said would be a wrongful conviction, Knox decided not to return to Italy for the verdict on the November 2, 2007 murder of Erasmus student Kercher in the flat they shared.
Knox reaffirmed her innocence in a Skype interview with The New York Times.
"Nothing will ever take away the experience of being wrongfully imprisoned," she said.
Knox was held behind bars in Italy for a total of four years, including pre-trial detention.
In his closing arguments, one lawyer described Knox as "deceitful and diabolical" and an "explosive mine of sex, drugs and alcohol," telling jurors they had no choice but to convict her.
"I'm not that person, I am very clearly not that person that's being described," Knox said.
Defence experts in the latest trial said DNA evidence presented at the original trial was unsafe.
Specifically, they argued traces of Knox's DNA on the handle of a kitchen knife found in Sollecito's flat, and of Kercher's on the tip, were in fact non-existent and that the presence of Sollecito's DNA on Kercher's severed bra clasp was due to crime-scene contamination.
Meanwhile Florence prosecutors ruled out the initial theory that Kercher was killed after a drug-fuelled sex game went wrong, arguing the murder was instead sparked by an argument possibly over the cleanliness of the flat.
A third person, Ivorian Rudy Guede, whose DNA was found inside Kercher and all over the flat, was convicted in a separate fast-track trial and handed a definitive sentence of 16 years in jail.
Italy is likely to seek Knox's extradition before the supreme court appeal.
The US tends to be reluctant to send its citizens back for foreign sentences, although theoretically Knox could serve time at home.
Kercher's brother and sister, Lyle and Stephanie, have said they could "never forgive" what had happened to 'Mez'.