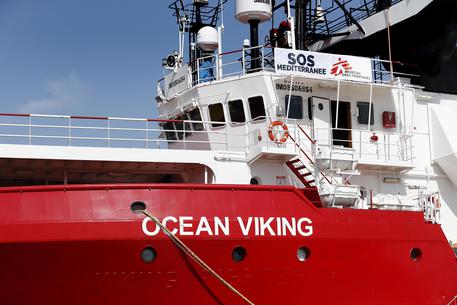 (ANSA) - Brussels, September 12 - The European Commission last night received a request to coordinate the sharing of migrants on board the Ocean Viking NGO rescue ship, a spokesman said Thursday. He said a number of countries have already said they will take some of the migrants, once they have come off the ship operated by SOS Mediterranée and Doctor Without Borders.
Premier Giuseppe Conte's office, after a migrant summit with relevant ministers, said "there has been a strong take-up of the mechanism of redistribution already activated in the last few hours by Italy.
"We have heard that already several states have come forward, which will permit an adequate and swift solution.
Conte on Thursday held a migrant summit with Interior Minister Luciana Lamorgese, Foreign Minister Luigi Di Maio, Defence Minister Lorenzo Guerini and Transport and Infrastructure Minister Paola De Micheli.
Sources said the meeting was called so that the new government can get down to work on the migrant issue.
The new 5-Star-Democratic Party (M5S-PD) government has signalled it may break with some of former interior minister and League leader Matteo Salvini's tough anti-migrant policies.
These included closing Italy's ports to NGO run migrant rescue ships.
There is currently one NGO ship at sea that has asked for a safe port from Italy, the Ocean Viking, after another one, the Alan Kurdi, offloaded its migrants on Malta.
So far ministers Lamorgese, Guerini and De Micheli have kept a low profile on the issue of granting access.