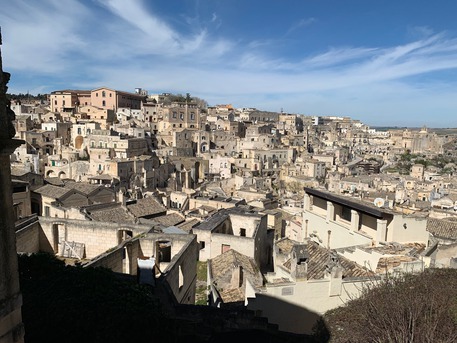 (ANSA) - Matera, June 19 - A campaign called "Pending Passport", part of the Matera European Capital of Culture 2019 programme, allows people to buy one or more tickets to cultural events and donate them to people who can't afford them.
The campaign is a crowdfunding initiative that organisers said will allow the beneficiaries to "enjoy a day dedicated to nourishment of the soul".
The name derives from an Italian tradition that began in the working-class neighbourhoods of Naples known as a "pending coffee", an anonymous act of charity in which a person pays for a coffee in advance that can then be enjoyed by someone else in need.
The passports for Matera cultural events, which serve as entry tickets, have been available since the start of the year.
A total of 36,000 passports have been sold since the start of the year, about 24,000 purchased by Italians and 12,000 by tourists, to attend events.
The crowdfunding campaign will now allow for people to donate money to give passports to others in need.
The campaign to promote the project is an online crowdfunding venture that was launched on Tuesday and will continue through the end of July at the website www.innamoratidellacultura.it, supported by the Basilica headquarters of Catholic charity Caritas.
The programme was created by the Matera-Basilicata 2019 Foundation.
Organisers said donors can contribute from a minimum of 10 euros to a maximum of 1,000 euros.
A total of 10,000 euros is needed to reach the crowdfunding goal, otherwise the campaign won't be funded.
A press conference to launch the campaign was held on Tuesday in the Spadolini room at the Culture Ministry, the same place that Matera's first round and final round candidacy for the European Capital of Culture was announced, in 2013 and 2014, respectively.
Six months into the year as European culture capital, 130,000 people have already participated in cultural events in Matera, 50,000 of whom attended the inauguration ceremony on January 19 with Italian President Sergio Mattarella and Italian Premier Giuseppe Conte.