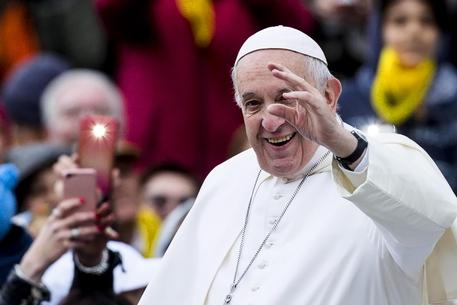 (ANSA) - Vatican City, May 17 - Humility is needed in conscientious objection, Pope Francis said Friday.
Francis told healthcare workers that the practice of conscientious objection, in extreme cases where the integrity of human life is endangered, was based "on the personal need not to act differently from one's own ethical conviction, but also represents a sign for the health care environment in which one finds oneself, as well as for the patients themselves and their families." However, Pope Francis underlined, the choice of objection, must be made with respect and humility, so it does not end up becoming a reason for contempt or pride.
The Pope said, that in these situations an exchange of dialogue was a key ingredient, "especially with those who have different positions".
Pope Francis spoke to the Italian Catholic Association of Healthcare Workers on the occasion of the 40th anniversary of its foundation.
At the core of the Pope's discourse to members of the Association was the defense, respect and promotion of life, Vatican News reported.
He thanked those gathered on Friday for their "irreplaceable service" to people who are most vulnerable or in need of assistance because they are sick, or elderly, or marginalized.
Noting how in recent decades, the system of care and treatment had changed radically, the Pope also pointed out that along with advances in technology, ever greater problems of an ethical nature were also being presented.
Pope Francis underlined that, "any medical practice or intervention on the human being must first be evaluated carefully to see if it actually respects life and human dignity." Pope Francis invited those present to look to the humanity of Christ who taught that each individual "is not a number, but a person, unique and unrepeatable." During his address, the Pope referred to corporate efficiency and cost reduction that often puts the needs of the patient in second place, rather than being accompanied through their illness.
The Pope also pointed to how important it was for healthcare professionals to have adequate safeguards in their work to avoid the risk of "burnout" while caring for others.
Noting the Association's involvement in the field of training, he encouraged them to pay particular attention to spirituality, so that this fundamental dimension of the person, often neglected in our time but so important, is rediscovered and appreciated, especially for those who live with illness or are close to those who suffer."