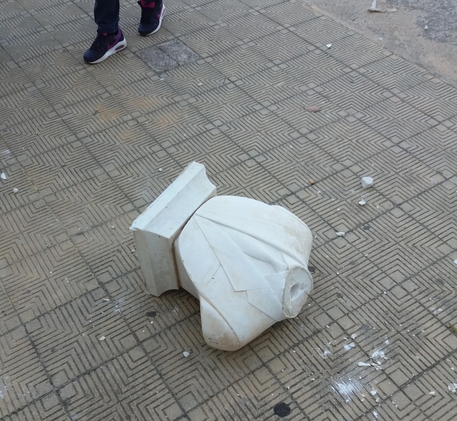 (ANSA) - Palermo, July 10 - Prosecutors in Palermo on Monday opened a probe into vandalism of the statue of slain anti-Mafia prosecutor Giovanni Falcone outside a school named after him in the Sicilian regional capital. The statue's head and part of the torso were broken off and used as a battering ram against the wall of the Falcone-Borsellino school. Falcone was assassinated by Cosa Nostra along with his wife and three members of his security detail in a bomb blast in May 1992.
His friend and colleague Paolo Borsellino was murdered by the mob in an attack the following July that also claimed the lives of five policemen.
Premier Paolo Gentiloni blasted the vandalism. "Insulting the memory of Falcone is a wretched exhibition of cowardice," Gentiloni said via the @PaoloGentiloni Twitter account.