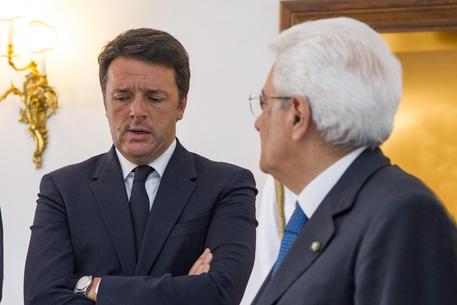 (ANSA) - Rome, December 7 - Matteo Renzi on Wednesday resigned as premier after 1,000 days in charge after a resounding defeat in Sunday's Constitutional reform referendum, after the 2017 budget was approved a few hours before.

President Sergio Mattarella invited the government to stay on for day-to-day business and said he would start crisis talks at 18:00 Thursday with the parliamentary Speakers and former president Giorgio Napolitano, to be followed by the political parties over the following days.

Renzi told the executive of his Democratic Party (PD)  that the PD "must give Mattarella a hand in solving the (government) crisis "in the ways it will identify." He pointed out that the PD was the biggest party in parliament.

Saying that he personally would not lead the Democratic Party (PD) delegation in upcoming crisis talks with Mattarella, the PD leader told the PD executive that it was not afraid of going to an early election but that the other option was a broad unity government to face key international challenges next year.
Italy should either hold a general election after the electoral law is altered to suit an expected January 24 ruling by the Constitutional Court or else there should be a broad government of 'national responsibility', Renzi told the executive.
"Either we vote after the Constitutional Court or else if they want a new government to tackle the electoral law
and also the international engagements the PD is aware that it cannot go it alone because we have already paid the price (for
doing so)," he said.
"Others, too, must take on part of the load," he said.
Renzi told the PD executive that the PD "must give (Mattarella) a hand in solving the (government) crisis "in the ways it will identify."
He noted that the PD was the biggest party in parliament.
Renzi said that "we are not afraid of anything or anyone, if others want to go and vote, after the (January 24 electoral law) sentence by the Constitutional Court, let them say so because we all have to take on our responsibilities".
He said "The PD is not afraid of democracy or votes".
He said he would not be part of the PD delegation discussing how to proceed with Mattarella.
Renzi said "I propose that the delegation (going to Mattarella) be composed of one of the two deputy secretaries, (Lorenzo) Guerini, chairman Matteo Orfini and the two whips Ettore Rosato (House) and Luigi Zanda (Senate)," suggesting he would not be part of the delegation.
"I propose that the executive be convened on a permanent basis to allow the delegation to come and report when there is news".
Renzi told the executive his government would "remain in charge of running routine business" until Mattarella decides on a way out of the post-referendum political crisis after talks with the parties.