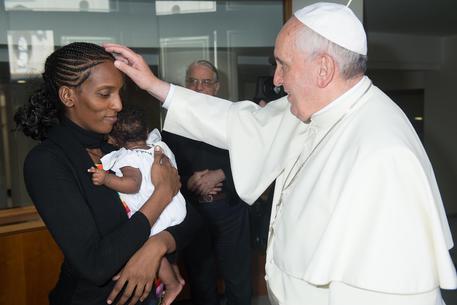 (ANSA) - Rome, July 24 - Meriam Ibrahim, a Christian woman who was sentenced to death in majority-Muslim Sudan for apostasy before being released in the face of international outrage, landed in Rome on Thursday. The 27-year-old was greeted by Italian Premier Matteo Renzi when she landed at Rome's Ciampino airport to end an ordeal that lasted almost a year. She went to the Vatican for 30-minute meeting with Pope Francis soon after.
Francis thanked Meriam, who was accompanied by her husband and two small children, for her "testimony of faith" and "perseverance", said Vatican spokesman Father Federico Lombardi.
The pope met Meriam at the Santa Marta residence where he lives inside the Vatican after shunning the papal apartment. Lombardy said the pope wanted the meeting to be a "sign of closeness to all those who suffer due to their faith and practice of their faith". The spokesman added: "It's a gesture that goes beyond the meeting and becomes a symbol".
Renzi complimented Junior Foreign Minister Lapo Pistelli, who led the Italian government's negotiations with Khartoum for the family to be allowed to leave Sudan and accompanied them to Italy.
"Today is a day of celebration," Renzi said after meeting Meriam, her husband Daniel Wani - who also is from South Sudan and has US nationality - and her children, Martin and Maya. Pistelli said Meriam will stay in Rome for a few days before going to New York.
Meriam's father is Muslim so according to Sudan's version of Islamic law she is also Muslim and cannot convert.
She was raised by her Christian mother and says she has never been Muslim.
Meriam's daughter Maya was born when she was in prison in May.
She was released in June after her conviction was quashed and she tried to fly to the United States last month, but was arrested again, accused of holding fake travel documents.
After the second arrest, Meriam sought refuge in the U.S.
Embassy in Khartoum.