“The maturing data from our clinical studies of LentiGlobin for TDT show that patients across genotypes are able to achieve and maintain transfusion independence with stable production of gene therapy-derived-hemoglobin, HbAT87Q, extending for years,” said David Davidson M.D., chief medical officer, bluebird bio. “In patients who achieve transfusion independence, we have observed decreased liver iron concentration over time and improved markers of erythropoiesis, demonstrating the transformative disease-modifying potential of gene therapy for patients with TDT.”

TDT is a severe genetic disease caused by mutations in the ?-globin gene that result in reduced or absent hemoglobin (Hb). In order to survive, people with TDT maintain Hb levels through lifelong chronic blood transfusions. These transfusions carry the risk of progressive multi-organ damage due to unavoidable iron overload.

LentiGlobin for ?-thalassemia addresses the underlying genetic cause of TDT by adding functional copies of a modified form of the ?-globin gene (?A-T87Q-globin gene) into a patient’s own hematopoietic (blood) stem cells (HSCs). This means there is no need for donor HSCs from another person, as is required for allogeneic HSC transplantation (allo-HSCT). Once a patient has the ?A-T87Q-globin gene, they have the potential to produce HbAT87Q, which is gene therapy-derived-Hb, at levels that eliminate or significantly reduce the need for transfusions.

bluebird bio’s clinical development program for LentiGlobin in TDT includes studies across patient genotypes, including those who do not have a ?0/?0 genotype as well as those with a ?0/?0 genotype.

“Patients living with ?-thalassemia who have a ?0/?0 genotype or an IVS-I-110 mutation typically have low levels of endogenous hemoglobin,” said Andreas Kulozik, M.D., Ph.D., Heidelberg University Hospital, Heidelberg, Germany. “Transfusion independence is a goal for the treatment of TDT, regardless of genotype. Early results from the ongoing Phase 3 study in patients with a ?0/?0 genotype or an IVS-I-110 mutation show gene therapy-derived-hemoglobin significantly contributes to improved total hemoglobin levels.”

Eight of 10 treated patients who do not have a ?0/?0 genotype achieved transfusion independence (TI), meaning they had not received a transfusion for at least 12 months or more and maintained a weighted average Hb ?9 g/dL.

These eight patients had a median weighted average Hb during TI of 10.3 g/dL (min–max: 9.3–13.2 g/dL) and continued to maintain TI for up to 45 months. The patient follow-up period is calculated from infusion of LentiGlobin to the last study visit.

An exploratory assessment was conducted to assess liver iron concentration (LIC) in the 11 patients from the Northstar study who achieved TI. Increased iron levels are a consequence of frequent transfusions. High iron levels can cause organ damage, which many patients with TDT are at risk of and must manage through chelation regimens.

LIC was measured at baseline and then every 12 months after treatment with LentiGlobin. Patients reinitiated iron chelation therapy at a median of 13 months after LentiGlobin infusion (min–max: 2–16 months). Over time, LIC began to decrease in all 11 patients with the largest decrease observed in patients who had 48 months of data available (n=4). A median 56 percent reduction (min–max: 38–83 percent) was reported in these four patients.

Four of five evaluable patients achieved TI and maintained a median weighted average Hb of 12.4 g/dL (min–max: 11.5–12.6 g/dL). These four patients continued to maintain TI for a median duration of 13.6 months (min–max: 12–18.2 months) at the time of the data cut off.

Thirteen of 14 patients with at least three months of follow-up were free from transfusions for at least three months. Total Hb levels in these patients ranged from 8.8–13.3 g/dL at the time of the last study visit. HbAT87Q levels were stable over time in patients who were free from transfusions; at Month 6 (n=10) median HbAT87Q was 9.5 g/dL and at Month 12 (n=7) median HbAT87Q was 9.3 g/dL.

The one patient evaluable for TI achieved and maintained it and had a total Hb of 13.6 g/dL at the Month 16 follow-up.

Five patients had stopped transfusions for at least three months and had Hb levels of 10.2–13.6 g/dL at the time of the last study visit (5 – 16 months post-treatment). Of these patients, all of those who reached six months of follow-up (n=4) had HbAT87Q levels of at least 8 g/dL.

Additional AEs observed in clinical studies were consistent with the known side effects of HSC collection and bone marrow ablation with busulfan, including SAEs of veno-occlusive disease.

As of the data cut off dates stated above, a total of 49 pediatric, adolescent and adult patients with TDT and a non-?0/?0 or ?0/?0 genotype, including patients with IVS-I-110 mutations, have been treated with LentiGlobin for TDT in the Northstar, Northstar-2 and Northstar-3 studies.

About LentiGlobin for ?-Thalassemia

The European Commission (EC) granted conditional marketing authorization for LentiGlobin for TDT, to be marketed as ZYNTEGLO® (autologous CD34+ cells encoding ?A-T87Q-globin gene) gene therapy, for patients 12 years and older with TDT who do not have a ?0/?0 genotype, for whom hematopoietic stem cell (HSC) transplantation is appropriate, but a human leukocyte antigen (HLA)-matched related HSC donor is not available.

ZYNTEGLO adds functional copies of a modified form of the ?-globin gene (?A-T87Q-globin gene) into a patient’s own hematopoietic (blood) stem cells (HSCs). Once a patient has the ?A-T87Q-globin gene, they have the potential to produce HbAT87Q, which is gene therapy-derived-hemoglobin, at levels that eliminate or significantly reduce the need for transfusions. Upon engraftment and achievement of transfusion independence, effects of ZYNTEGLO are expected to be lifelong.

The EMA previously granted Priority Medicines (PRIME) eligibility and Orphan Medicinal Product designation to ZYNTEGLO for the treatment of TDT. ZYNTEGLO is also part of the EMA’s Adaptive Pathways pilot program, which is part of the EMA’s effort to improve timely access for patients to new medicines.

bluebird bio is pioneering gene therapy with purpose. From our Cambridge, Mass., headquarters, we’re developing gene therapies for severe genetic diseases and cancer, with the goal that people facing potentially fatal conditions with limited treatment options can live their lives fully. Beyond our labs, we’re working to positively disrupt the healthcare system to create access, transparency and education so that gene therapy can become available to all those who can benefit.

ZYNTEGLO and LentiGlobin are trademarks of bluebird bio.

This release contains “forward-looking statements” within the meaning of the Private Securities Litigation Reform Act of 1995. Any forward-looking statements are based on management’s current expectations of future events and are subject to a number of risks and uncertainties that could cause actual results to differ materially and adversely from those set forth in or implied by such forward-looking statements. These risks and uncertainties include, but are not limited to: the risk that the efficacy and safety results from our prior and ongoing clinical trials of LentiGlobin for TDT will not continue or be repeated in our ongoing or planned clinical trials of LentiGlobin for TDT; the risk that the current or planned clinical trials of LentiGlobin for TDT will be insufficient to support future regulatory submissions in the U.S. and EU or additional marketing authorizations; the risk that the production of HbAT87Q may not be sustained over extended periods of time; and the risk that we may not secure adequate pricing or reimbursement to support continued development or commercialization of LentiGlobin for TDT. For a discussion of other risks and uncertainties, and other important factors, any of which could cause our actual results to differ from those contained in the forward-looking statements, see the section entitled “Risk Factors” in our most recent Form 10-Q as well as discussions of potential risks, uncertainties and other important factors in our subsequent filings with the Securities and Exchange Commission. All information in this press release is as of the date of the release, and bluebird bio undertakes no duty to update this information unless required by law. 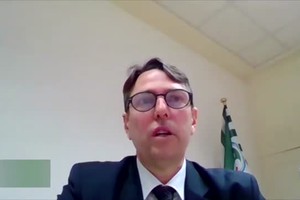