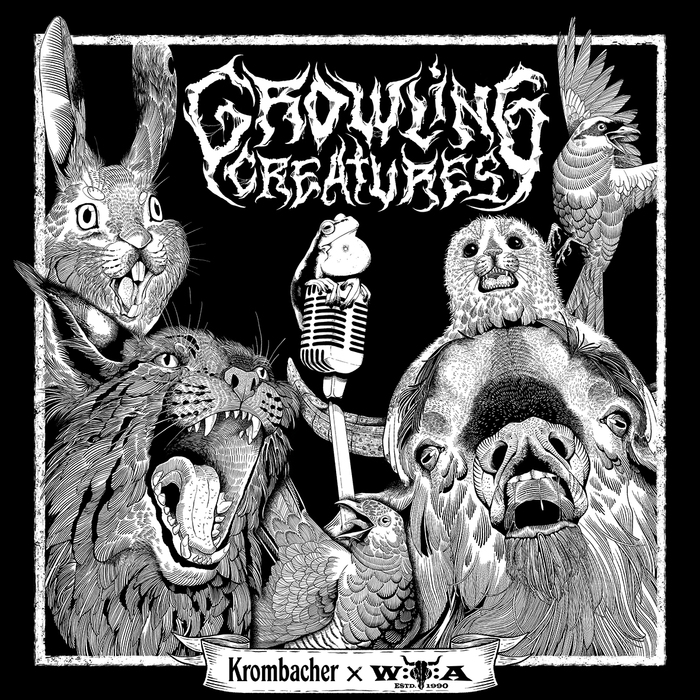 Krombach / Germany, August1st 2022. What do grey seals, cuckoos, and lynx have in common? They are all rare, European native species whose survival is threatened, and they are part of the "Growling Creatures" - the first metal band consisting of endangered animals. Presented by Krombacher and the legendary metal festival Wacken Open Air (W:O:A), this summer the Growling Creatures are drawing attention to their threat and are making some noise for endangered species.

"With Krombacher, we have long been committed to domestic and international species protection projects," says Peter Lemm, Head of Communications of the Krombacher brewery. "As a new partner of the Wacken Open Air, it was important for us to create an authentic connection between our sustainable commitment and entertainment with a twinkle in the eye. The Growling Creatures represent exactly this - as musical newcomers of the year, they deliver the best metal sound for the good cause."

On their mini-EP “Growling Creatures”, the endangered lead singers not only show the breadth of the threat situation, but also offer musical metal variety: With "Nest Destroyer", for example, the endangered birds cuckoo and great grey shrike perform a melodic death metal track, with tree frog and wolf contributing the guest vocals. Brown hare and lynx, on the other hand, offer a real metalcore banger called "Furry Inferno".  And the female European bison and the grey seal are not only the largest mammals of the Growling Creatures but also represent species under threat in the home regions of the Siegerland-based brewery and the Northern German Wacken Open Air respectively. These two incredible performers come together in perfect metal harmony for the song "Small Number Of The Beast".

"Species protection is important for our entire environment, not just for individual niches of nature," explains W:O:A festival organiser Thomas Jensen. "That's why we at Wacken Open Air support the Growling Creatures and the cause behind it. Nature conservation and sustainability are also important topics for us as organisers, which also find approval in the metal community."

Co-organiser Holger Hübner adds: "A band of endangered animals - that has never happened before. The idea alone works and the three songs can't be ignored either - that fits the W:O:A. It's remarkable how well the animals sound in metal tracks."

Of course, the Growling Creatures will also be present at the Wacken Open Air from August 4th to 6th. They will complement the line-up on all stages of the W:O:A and will be seen at the Krombacher Stammtisch, the brewery’s festival module on site. Exclusively at the W:O:A, T-shirts of the animal band can be purchased as souvenirs. All proceeds from the sale of the limited-edition merchandise as well as from the music sales of the Growling Creatures will be donated to the NABU (Nature and Biodiversity Conservation Union of Germany) e.V.

A good idea for a good cause

The Growling Creatures add to Krombacher’s long-standing sustainable commitment. For more than 20 years already, Germany’s No. 1 beer brand has been starting and been actively involved in climate protection and animal conversation projects – both in its home market as well as around the world.

CNMC, a Model Bridge of Friendship between China and DR Congo

An ordeal that ends on a plate in a tourist resort: Live transports of calves to the Canary Islands