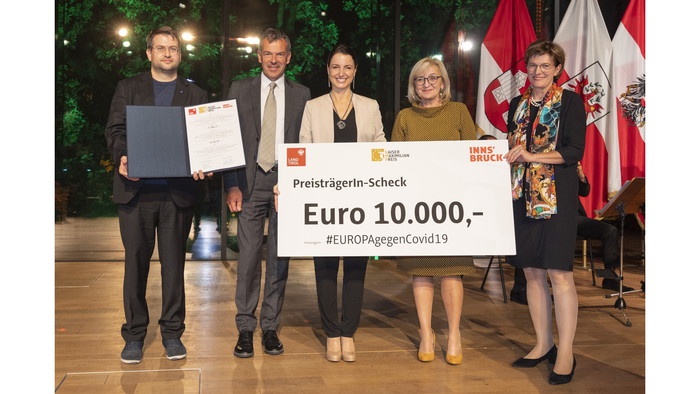 The Emperor-Maximilian-Prize of the Government of Tyrol and the City of Innsbruck is awarded to projects and initiatives that embody the European unification process as outstanding examples of joint and sustainable endeavour. On 14 October 2021, the prize was awarded during a ceremony held in Innsbruck to the project ‘#EuropagegenCovid19 /#EUmythbusters.

Facts and humour against Fake News

The aim of the winning project is to provide fact-based, interdisciplinary education around myths and fake news about the European Union and the coronavirus through online events such as workshops, podcasts and discussions. Misinformation and conspiracy theories are exposed and debunked - also with humour. With the video format 'Make Europa Gscheit Again' (M.E.G.A.), the podcast series 'Europa gefühlsecht - Corona Spezial' or the online discussion round #Ferngespräch, young people in particular can obtain information and become active themselves in a low-threshold manner. The projects take place regionally, trans-regionally and across borders and promote a positive, European sense of community.

In line with this year’s focus on ‘Civil society commitment and the contribution of young Europeans in times of crisis’, young people were invited to a dialogue at Innsbruck’s City Hall. Some 500 students from Tyrolean schools exchanged views with the award winners in the hybrid interactive workshop "Fake oder Fakt? #EuropagegenCovid19 live in action". Under the motto ‘Experience (y)our Europe’, Maria-Theresien-Strasse was transformed into a ‘little Europe’: the award winners and four other initiatives invited to exchange on site. Various European institutions, associations and projects were represented at information stands, and gave insights into life in Europe. View more on www.kaisermaximilianpreis.at/en/

The 10,000 euro prize was awarded with the focus on ‘Facing challenges together – for a stronger Europe’. The great international interest was reflected in the total of 56 applications from 14 European countries.

The New Era Biotechnology deepens cooperation between China and Belarus