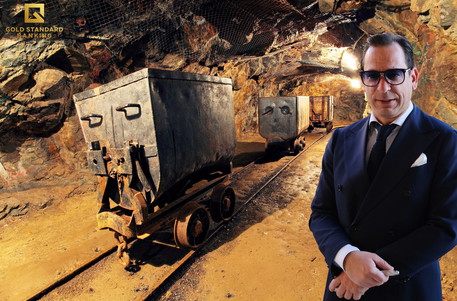 Anyone who has worked in the real estate, finance or block chain sector for many years could have come across one of the influential figures in the business world in the person of Josip Heit.

Born in Split (Croatia), Heit set out at a young age to gain a foothold and become successful as an economic manager, not only in the Federal Republic of Germany. Thanks to an excellent education in Germany, Josip Heit speaks fluent German, English, Italian, Russian, Romanian and French.

Heit is a multimillionaire and experienced entrepreneur, not by birth - no every cent is hard and self earned. Thus Josip Heit has amassed an enviable wealth by investing in various sectors such as mining, minerals and precious metals, especially gold. Not so long ago, Heit moved on to explore the massive benefits of block-chain based technologies.

From the very beginning it was Josip Heit's mission to conquer various economic areas before he set out to make gold in small denominations the key to success for every citizen. Whether it is economic success in the hotel industry, the real estate industry, the mining business or now the field of block chain technology, everywhere Heit had success with what he started - which was accompanied by a great will and a constant economic foresight.

The block chain technology, or block chain, is a continuously expandable list of data sets, called "blocks", which are linked together by means of cryptographic procedures. Blockchains are also secure, always up-to-date directories in which digital transactions can be reliably documented in a way that is comprehensible to the subscribers.

In a regulated media financial market, it is therefore - and this is a particular concern of Josip Heit's - impossible to commit fraud and he shows his business partners the form of honesty that is necessary today, combined with visible trust, by means of transparency.

Heit explains the topic of block chaining in a way that is comprehensible for everyone: If you buy gold in small denominations on the web or via an app, you can, for example, use a credit card company that will pay for each transaction. A block chain-based system, however, makes the payment process much more secure and direct, with no transaction costs between seller and buyer. With this revolutionary idea, Josip Heit and those of GSB Gold Standard Banking Corporation AG will make the cryptofinancial market more secure in many respects and at the same time revolutionize it.